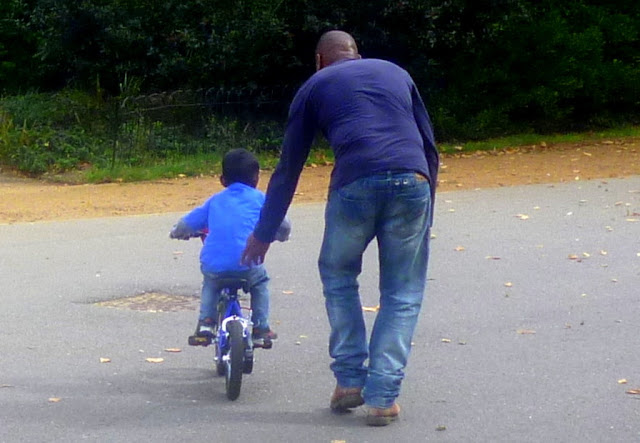 It's a while since I took this photo in the park, as you can tell from what they're wearing. Aesthetically, I was attracted by their dark skin and blue clothes against the almost-black hedge. Mostly, though, I know that, like many adults with painful childhood memories, I'm often transfixed by iconic scenes of parents and children interacting successfully. I do have memories of my dad doing exactly what this one's doing - and riding a bike is one of the few life skills I mastered fairly normally. Anyway, the photo remained on my computer, occasionally mouthing 'blog me', but demonstrating little relevance to anything... until Litlove's comment below about the British psychoanalyst Donald Winnicott and his concept of 'transitional space'.

I remembered reading Winnicott back in the 1970s, when I first became interested in psychology and psychotherapy - someone rather humane and progressive, less grating on a feminist than most of the mid 20th century 'mother and child' merchants. Details had faded, though, so Friday lunchtime found me in the workplace library. They don't study humanities where I work, so although I'm right next door to a big library, I rarely make much personal use of it. They do study psychology, though - social psychology, but social and clinical clearly overlap. So there was plenty by Winnicott, it transpired. I went home with a couple of not-too-heavy collections of talks and articles and spent some of the weekend reading them. Reading and wincing, because here is a story told in elementary terms of 'good enough' parenting and consequent normal development, and I know a lot of it was not my own experience. It's dispiriting, but horribly fascinating to contemplate how long ago it all went wrong.
Posted by Jean at 18:25

I'm so proud of you for giving Winnicott a go. Alas,when you read him, you do wish dearly (I know I did) that there could be a Winnicott in your own life. It's the book 'Playing and Reality', I think, that has the most about transitional space. I wonder whether it's our generation who suffered most from poor parenting. Our grandparents went through the war, two wars, sometimes, and I think it altered them in ways that no one has paid much attention to. It also left a lot of motherless/fatherless children in a bad position to bring up their own children when the time came.

It sucks big time, to realise how things could have been so different if only our parents had made a better job of it. But I do think (and personally feel) that it's possible to mourn our childhoods and move beyond them, to a place where they are far less relevant. I'm cheering you on, as I hope you know.

I'm probably closer to your parents' age than yours, Litlove, and, yes, both parents and grandparents suffered a lot in both world wars.

I'll look for that book in particular - thanks. I don't usually find it difficult to read about psychology, on the contrary, it only fascinates me and I have usually found it empowering to learn more. I think the fact that I find it painful to read Winnicott - mild and polite as he is (though, gosh, very patronising to a modern ear!) - is precisely because some of his observations are so relevant to me.