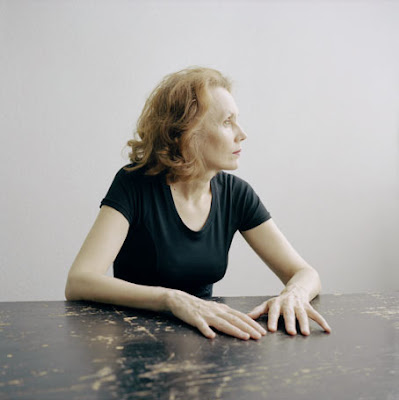 (no credit found for this very evocative
photo of Kaija Saariaho)


I have so many plans for the weekend, and then I lie in bed like lead and can't get up. So Saturday and Sunday mornings lately have been times for listening to a lot of classical music, and led to increased listening outside those times too.

My Finnish friend had told me about the growing fame of Finnish composer Kaija Saariaho, whose music she likes very much. I found I did too - and how great that Saariaho is a woman our age, we both thought! So she invited me to the first London performance last week of Kaija Saariaho's Leino Songs, programmed alongside Sibelius, notably his Third Symphony (sending me off to reread Teju Cole going on about that very work). It was a beautiful concert: Sibelius renewed, all fresh and open and mysterious alongside Saariaho's wild, haunting music, where the voice almost seems to fuse with the orchestra in a single long sound. Here's one of the Leino Songs.

For a country of small population, Finland seems to have a great flowering in many of the arts. Perhaps their much admired education system has something to do with it.
Posted by Jean at 17:30

Such a pleasant surprise, Jean, to find your post on something Finnish. I wish I could have been with you and your other Finnish friend at that concert. Though I know of Kaija Saariaho and have the DVD of her opera L'Amour de Loin, I've not heard any of her work live. The Leino Songs I gather are based on the poems by Finland's national poet Eino Leino, and I'd dearly love to hear more than the link you gave. I think I'll have to buy some CDs!

Thanks so much also for the link to Teju's amazing words on Sibelius. I have much to still learn about my native country's music so it's always interesting to read what non-Finns have to say about it. The music education there certainly has been world recognized.

I wish you could have been there with us, Marja-Leena!