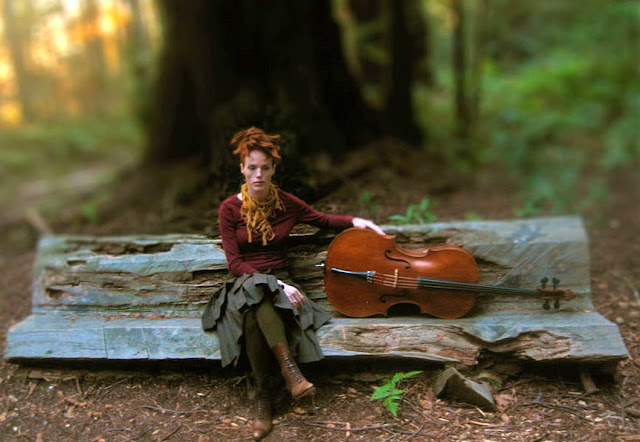 ... with the utterly fabulous Zoe Keating, whose new album of that name reached me today. I'm alone in the office, so I'm playing it LOUD, and will no doubt continue to play it obsessively for weeks, as I did with her last album.

The CD is gorgeously packaged with photos (like the one above) by her partner Jeffrey Rusch of Zoe in the forest north of San Francisco, where they now live with their young baby, make and record music. "Before moving here", she writes, "I never thought much about trees. I saw them as attractive greenery - nice to look at, but potentially full of spiders... It was a while before I began to see them as living beings, and then as part of a larger entity - The Forest. Eventually, on my walks, I began to notice signs of the Ghost Forest - the giant redwoods that used to be here, cut down 100 years ago to build and rebuild San Francisco."  You can hear the giant trees and see them in the music, which is even deeper and more resonant than her last album, while remaining just as pared down. Other-worldly. By turns haunting, gut-grasping, beguiling and mesmerising. Wonderful. And wonderful, too, of course, that she's built her huge and deserved success entirely independently - no record company; music made by one person, a cello and a laptop and promoted on line.

Hear some of the new album, download it for very little money or order the CD on her website.

Watch and hear Zoe Keating talk about and demonstrate her personal fusion of classical cello and computer technology.

Watch and hear her play some more of a piece called 'Escape Artist'  - which she certainly has been for me today.


"Every sound on this recording was played on an acoustic cello,
including percussive parts.
On 'Hello Night' I whistled into the f-holes."
Posted by Jean at 13:06

This will be the second album I acquired based on your advice. I never "shop" for music anymore because my taste is so very, well, personal. Have spent many fruitless hours looking for something that resonates, to no avail. Now, I rely solely on people like you (and other great bloggers) for hints and possibilities. Zoe's music is truly breathtaking. The first album I obtained based on something you wrote is Camino, by the late Oliver Schroer. I enjoy it immensely. Thank you!

Wow. Thank you for introducing me to such an amazing album.