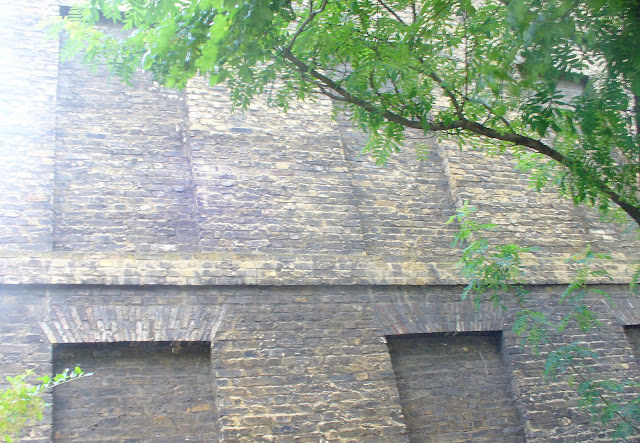 I’m not in the office today; decided to work four-day weeks for the rest of the summer, since the summer school fiasco used up all my spare money and I can’t afford to go away again. So today I’m going to the Alice Neel show at the Whitechapel Gallery.

Whitechapel, where I worked for a while in the 1990s, in a hot, square, converted cloth warehouse now the head office of a drugs and mental health charity. Whitechapel, home to the largest British-Bangladeshi community, where every morning more and more of the young mothers taking their kids to school were wearing the niqab – black ghosts on the tidy, sterile streets of the public housing estates. Whitechapel Gallery, where I often had lunch with my friend C, where one day in the café she confided something that stunned me and quite changed my image of her. I thought of calling her about the exhibition. My friend who died a few months ago. Whitechapel, where I never go these days.

I’m pathologically defended with people – probably the result of a mother who bared her (not very  nice) soul to me, as messy, damaged adult souls should not be bared to young children who don’t have a context for the pain, who held me close, too close, her little acolyte. You can’t be pathologically defended against everything and remain alive and sane, so perhaps I give my heart too readily to places, let them bathe me in all the love and hate and fear that make up their auras, and when it all becomes too much I leave and can’t go back.  My little world is full of ordinary places that were once familiar, daily territory, that grew so loaded with feelings, good and bad, that when life moved on they stayed there, vivid ‘hot spots’ in my mental landscape, places to be avoided for fear of getting burned.

Norwich proved, after all these years, to be a hot spot. Yorkshire, where I used to live, is definitely one – I didn’t go back for more than twenty years. London has its hot spots too. In such a big city you can easily avoid large areas. Holloway, where I lived for nearly a decade with friends I no longer see – I don’t go there. Kings Cross, where I worked in the job that brought me to London, was off my map for the longest time, until the opening of the lovely Kings Place arts centre brought it back into ‘my’ London. I recall consciously trying not to fall into this syndrome when I left the job I did for nearly fifteen years, in a backstreet office in Clapham from where politicians and their acolytes came and went to destinations all over the world (mmm, still an acolyte). It was strange indeed to realise that office would no longer be the magnetic pole that everything whirled around. I didn’t want a hot spot just three miles from my house, so I made an effort to keep in touch, call in from time to time, and bit by bit the place began to lose its charge – better: these ‘hot spots’ are not very healthy.

So, anyway: Whitechapel, Alice Neel - I think that’s another blogpost.
Posted by Jean at 20:31

I think that places really do give off vibrations, literally.Traces of past and present emotions stored there, like airborne fossils or bacteria.The more sensitive one is, the more vibes are picked up and as you said, we bring our own baggage to each place.

Maybe that's why sometimes it feels that moving out of a particular house or town or country is crucial to our well-being, even to our survival..

A very good evocation of the power of places and memory. It's odd how ghosts of people known haunt the streets, how we have our own individual world within our head. When I go back to some places from the past, although I'm interested to see how they are now, I have to numb myself slightly and see the glass as half full. One place I wouldn't really want go back to.
But some have happy memories. It's odd to go round a place you lived in aged c. 22 (in my case Belsize Park) - it seems as if a different person was there, and you wish you could give her some advice! Best wishes.

Whitechapel certainly has a great physical presence and history but our sensitivity to once familiar places and the way stations of our lives is our own and often our reluctance to retrace our steps is a need to avoid being intimately reminded of our past and mortality.

If we avoid the psychic hot spots the tantalising possibility of revisting at some point remains open. We just need to avoid them for now . We're almost immortalising these places because we want to believe our relationships with them are so intensely special, personal and lasting when revisiting them would quickly show us how impersonal life is and how swiftly and relentlessly it moves on.

The other day i took the train into town for the first time this year and at London Bridge station saw the concrete skeleton of the first dozen or so storeys of the latest London Bridge City tower going up out of the train window and it shocked me as the concrete construction looked like a huge gaping scaffolded and scolding human face encroaching on a landscape i thought i'd made my peace with. i'd lived in the area previously and so much had gone wrong there.

It really was an uncomfortable feeling but it was fleeting.

The art, i think, is to surrender to and examine these triggered feelings rather than wasting more energy superstitiously empowering places , things and memories to stay away from , a strategy that normally just spiritually chalks us into the darker corners of our lives.

Funny, when a place had associations for me, I intentionally layered over new ones to dilute the painful and awkward ones. Only my parent's house is still haunted, because I couldn't add any other memories of my own there. Places were always worth salvaging for me.

i can remember standing in places that were emotionally charged for me, places that housed important stages of my life's journey, and wondering how i might feel 15-20 years later revisiting. no matter how charged the places were, they never held the power i thought they would when i returned. my life had clearly changed and moved forward leaving these places as only small turns in its path. no matter, i am still surprised when i uncover this truth, still expecting something different when i revisit my own history.

Your posts on these hot spots made me think about my own charged places, some of which were the setting of what felt like misery at first but which transformed, over time of living there and then later in memory, into a sweet melancholy and a yearning for them. Except for one spot which still manages to poison my soul and my body, regardless of how many defenses I bring. Can't seem to make peace with that one. Your meditations on such places though, all help, because I know I am not alone.

It astonishes me sometimes to think that there must be people I know still living in places I fled from, having presumably had their own traumas and reversals - some of them the very things I was fleeing - but having in some way reconciled that with the place and continued there.

A few hours lurking on Facebook confirmed this was indeed the case, and I was filled with horror at the idea that people dredged each other up this way, and resolved never to have anything to do with it, feeling glad that I have the concealment of a married name.

Later came the idea that to 'do a geographical' could be a mistake, that I might be taking the problems and negativity I was trying to escape with me. But still, I think sometimes shaking the dust from somewhere off one's feet is the only course. I don't really blame the places as such, but at times the associations and memories are just too much and can't be overcome. Occasionally I wonder if it might be worth trying to go back in order to exorcise something, but not really enough to make me do it.

Changing countries makes it all easier, I think. The town where I now work had a particular horror associated with it for a time, but not really directly personal, and now having to go back there for more positive reasons has redeemed it quite well.

I once thought it was a personal failing to struggle like this; it's a relief to know it isn't.