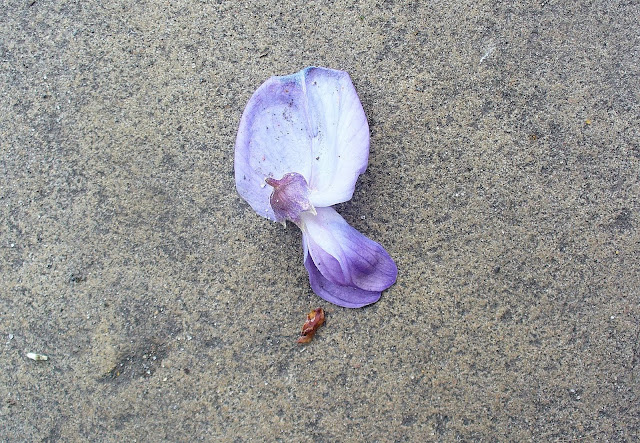 It was close to freezing overnight, exceptional for the south of England in mid May. We woke to a blue, blue sky with tiny floating clouds and a new blue government with patches of yellow - a Conservative-Liberal Democrat coalition. I suppose I'm only slightly more depressed by this than I would have been by a Labour-LibDem coalition, the option I hoped my vote would support. Your vote counts for nothing in our outdated electoral system unless you live in a very marginal parliamentary constituency. All the angry people prevented from voting by the also outdated organisation of polling stations can rest assured that - right as they are to be angry on principle - the lack of their votes made no difference! Being first, a long time ago, with all kinds of stuff is not serving us well these days, as demonstrated daily by the desperate inefficiency of the now very old transport, water and sewage systems under London.
So we have a new government and I dissent profoundly from many of its stated beliefs and priorities (well, actually not so much from its stated priorities, woolly and anodyne as most of those are. I strongly oppose the retention of Trident missiles, the commitment to cede no further powers to the European Union and the withdrawal of Child Tax Credits. But it's more the things they don't say, the priorities they don't have, that appall me. The lack of any willingness to admit the scale of the shit we're in, to do enough about it or to ensure that the weakest don't suffer most from what they do do.)
I suppose I'm a dissenter more deeply than I'm anything except a woman. I dissented from the triangular misery of my unhappy birth family, the inflexible, self-hating discipline wielded by parents who felt powerless elsewhere in their lives. I dissented throughout my school and university years from the education system. By the time I reached young adulthood, I'd joined the growing movement of women dissenting from the prevailing structure of gender relations. I dissent, silently, daily, from the globalised, automated, over-bureaucratised, over-informatised, compulsively driven culture of work. I dissent most of all from the power of money and brute force that rules the world, the obscene inequality and inconceivable suffering this results in.
And I'm just a small, mild, peaceable person, and I'm so tired of dissenting. Sometimes I wish I could go off with a group of like-minded people and live a very basic, very different life on a bit of land that no one else wants. I happen to live in a small, crowded country particularly unconducive to that option. For some years I belonged to a group attempting to establish a co-housing community - a very mild and unthreatening way of living slightly more cooperatively. Many such attempts have succeeded elsewhere in Northern Europe and in the US, but very few in this country. The British financial and land-planning systems are highly inimical to any deviation from the norms of property ownership.
So here I am, here we all are: part of each other. I don't much like it, but this is it. I can only try (with mixed success. It's very hard. I'm very tired and worn and a mass of impulses to anger and despair and selfishness) to represent something else in my daily dealings with others. Try to be kind, mild, honest and aspire to the wisdom my friend Peter at Slow Reads wrote about the other day. Try to hold a vision of something better. Try, and keep failing, and keep trying again.
Posted by Jean at 18:19

When Cleggeron talk about readdressing unfairness in society it just lacks the level of anger I expect to see. At least Gordon always did seem like he had a clue what poverty looked like, and felt like, and was genuinely outraged by it. He just didn't know what to do about it without coming over all ... um... lefty?

I'm dissenting. Rejoined the Labour party, will rage against the shiny machine that defers to the market (or the meerkats, as I've heard on Twitter).

It's time we stopped thinking economics was science. Time we stopped mistaking price for value. Or ... should I say 'they'? There are many of us who caught on a while ago!

I believe our leaders should have to suffer the consequences of their decisions. They, and their families, should be banned from private healthcare, private education, private pensions. If they deem their institutions fit for the rest of us, they should be prepared to live within them.

So - keep dissenting. And yes, I'm sick of my vote counting for bugger all, up here in Yorkshire where the Lib Dems run second but the Tories dominate, and Labour are a dirty word.

The good thing emerging is the realisation in many people that their beliefs are not so center after all. Their disgust at their vote giving mandate to the tories, when they thought they were doing the opposite, is awakening them.

Interesting times. Their move to redefine 46% as a majority in a confidence vote is just unbelievable though. They clearly fear defections.

The brand new minister for equalities voted against every important piece of gay equality legislation in her time in parliament. I don't know whether to slap her or kiss her - I assume the later would be more painful for her.

But yes... keep on dissenting - you won't be doing it alone!

Jean, you made me cry with this litany of dissent, most of which I share and know so well. I'm so thankful for the internet creating at least a virtual community where like-minded people can come together and not feel so alone, even if we can't live together in intentional solidarity.

So tired, with you, exhausted and yet what option do we have other than to keep going, keep dissenting? Ugh.


(Not to call anybody's a dying oak! This is just second observation in response to what I took as your image/spring-fall prompt. And thank you for the prompt! I've had this unresolved memory of horizontal light from a 3/4 moon which lit up the room when it set at 3am and which I mistook for dawn. Did it ever get dark after it set! Your seasonal reverse on the the petals - so true! - jibed with that astronomical confusion and then again with an oak we have whose meagre portion of red leaf sprouts are just not turning green. Thank you for helping me to settle some of this weirdness. You've got a great slant on life's reversals that is somewhere between helpful and revelatory.

What Pica said so eloquently already -- indeed, what choice do we have but to keep going. Sharing our stories, the way we do here, lightens the load, because we know we are not alone in this.

Stray, it's always good to hear from you. Please don't apologise for ranting - let's all rant! I didn't know about Theresa May's appointment when you posted this - ugh!

Beth, Pica, Alembic, your words mean a lot to me.

Bill, your responses are deep and thought-provoking, as always! I've been looking at your photos and like them very much - you get up close, but remain discreet and sometimes veiled, as well as penetrating.