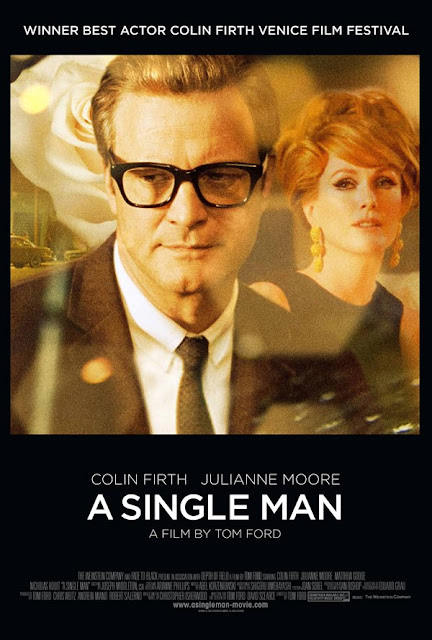 I went to see A Single Man and found it about as far as it could be from the glossy, hollow good looks, from the ad-man's dream, from everything I'd seen it accused of. Not a stylised, superficial thing redeemed by Colin Firth's incredible performance, not at all. Form and feeling don't conflict here, they conspire. Fulsome beauty of colour and light, seering elegance of line, do not (or at least don't only) indulge the director's aesthetic, but provide an exquisite, enhancing container for primal emotion. It was really almost overwhelmingy involving and moving. I staggered out with many tears behind my eyes and I was not the only one, I think. Having recently seen I am Love, with the glorious Tilda Swinton, which is in many ways similar in style and effect, I wondered: what is this all about, this staggering retro-beauty wrapped around deep and wild emotions? Wished too, perhaps, that all those tears behind my eyes would fall, wondered what might lie beyond them. But real life, alas, is not exquisitely intense enough to set them free, not close enough to beauty's edge.


----------------
The question keeps returning, about art as an emotional experience that for many years I craved and took and was unequivocally glad of, and about which I'm no longer enequivocal. Where the pleasure and satisfaction was, there is pleasure still, but accompanied by this huge uncertainty. Is this real? Is it healthy? Is it more like intoxicating oneself with drugs or alcohol?  It's an important, stimulating question, worth engaging with. Now it's there, it's not about to leave. I don't know, though, that I wholly welcome its advent. I suppose that's why my thoughts  of facing it as fully as possible, making it the organising principle of a new blog, remain so far only thoughts.
Posted by Jean at 08:27

I think those are important questions. When I first started meditating seriously, I wondered about the validity of writing fiction as an occupation. After all, I spent my days making up stories. How is that engaging with mindfulness of the here and now? I brought that question to a teacher, who just confirmed that indeed it was a question. But I now believe that we are here in this world to learn and love, to explore it and the experience of materiality. Making art or enjoying art is as real as anything else. It's all life.

Thanks for the heartfelt film recommendations, Jean, I now want to see them both.

That art has such an emotional effect on you says to me that the art was successful in achieving that response. Why should that be unhealthy? An unusual question that leads to another, what is art for?

It's a very important question that I wonder about too sometimes, but I guess I gave my life over to art and beauty long ago. The constant creation in nature is real; poignancy comes from the destruction and loss on the other side. No wonder we find satisfaction in art which expresses beauty and pain, hope and loss, and find ourselves trying to be part of that creative force...

As with most questions about appreciating or engaging with the world, I think it's not a question of whether, but of how. Art can be a way of hardening your heart or of softening it.

There are all those admonitions against music in old Buddhist scriptures, which I think are nonsense now and were probably nonsense then; but of course you can see what they're driving at: you can flee into sensual experience and stimulation to escape the experience of emptiness and the reality of impermanence. But that's only one of the ways that you can engage with music (or film or books or whatever), and you can engage with so-called real life in exactly the same way.

You write eloquently about A Single Man. Yes, it was beautiful and haunting, simultaneously unbearable and riveting. I thought the complex process going on behind the eyes and under the skin of Colin Firth in that long close-up where he learns of the death of his beloved through the medium of an agonising telephone call, was one of the most illuminating moments I've ever seen on film. He was wonderful. Beyond acting. Sublime! I really felt that a man had been flayed alive in front of me.

This business of the experience of art and literature preoccupies me a great deal. When I paint I think of the process as a conduit through which to distil the experiences of my life. I know that the best of my work provokes an emotional response from some people. That for me is the 'Quest for the Grail' of painting. Paintings, like music, poetry and literature can be portals through which we pass to places we need to visit. The great Crucifixions and Depositions allow us to touch on the mysteries of life, agony and death. They serve as rehearsals, a preparatory run-through of what we'll all have to face sooner or later. I know that documentary photography can do the same thing. But I think it does it differently.

I sometime worry that what I paint is in fact a fiction, though it doesn't seem like that to me when I stand alone before my easel.

I responded a little to the first three comments in my later post. Such thoughtful feedback means a lot to me and I really hope to try and keep writnig seriously about these things and to have some conversation about them.

Clive, hello! You came here from Via Negativa, I bet. Dave is introducing his friends to one another, which is so nice. I've been your blog and looking at your paintings quietly for a while. I completely agree with you about Colin Firth in A Single Man. He's a stunningly wonderful actor and I'm awed by his work in this film. I pride myself on having picked him out for great things many years ago when he was still playing weirdos and villains on UK television. Julianne Moore, too, come to think of it, I remember finding her wonderful in Vanya on 42nd Street, long before she became a star.

I need to think much, much more about art and feeling and fiction and life. I know I don't find paintings, even beautiful, fantastical paintings like yours Clive, to be 'fiction' in the way that films and novels, are, but to be very here and 'real' and everything you say.

Hi Jean! Yes, good to hook up via Dave's wonderful site. For me via negativa has brought much by way of inspiration and interesting contacts, and that's just the bonus to the extraordinary flowering between the two of us that started when Dave wrote a sequence of eight poems based on my paintings, The Temptations of Solitude. This is due to continue in a reversed mode of collaboration with his current Bestiary, for which I'm to produce images. He's a star!

You were right to notice Firth. I saw him first in a dark psychological thriller called Apartment Zero, and he caught the eye and imagination in that, long before he emerged dripping wet from a dip in that lake, as sexy-as-all-get-out under the appraising eye of Jennifer Ehle in Pride and Predjudice!

I'm glad you enjoyed looking at my work. I in return am enjoying exploring your blog. We'll meet here again.