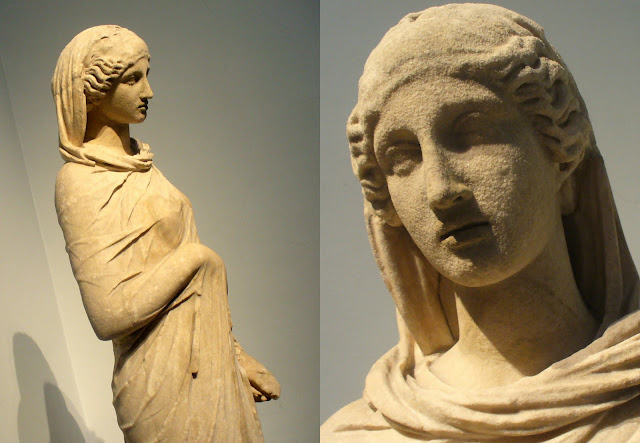 Sweet stone sweet-faced lady
from Ancient Greece via a graveyard in
and a stately garden in
sweetly standing in your corner of the gallery
small, eloquent stone hands under your flimsy drapery
your aura sweetens my morning
your frank, modest demeanour offering hope
that something sweet in human nature endures
as well as all the horror.
British Museum: Greek and Roman Sculpture Gallery
'The Trentham Lady', Greek, about 130 to 100 BC

"The original context of this statue is uncertain, but it may have been made in Greece and taken to Italy at a later date, where it was reused as a funerary statue for Publia Maximina, wife of Sextilius Clemens, whose name is inscribed on the plinth. The statue was formally in the Duke of Sutherland’s collection at Trentham Hall, Shropshire."
Posted by Jean at 12:33

She's beautiful and that serene face does transcend the centuries - that's what I love so much about being in the Greek and Roman galleries at the Met and the British Museum, that calmness. I love that you're doing these short poems, Jean, they're wonderful.

I'm fascinated by the repetitions of "sweet" -- the insistence of it.

She's lovely, isn't she, and the covered hands are mesmerising.

Beth, I was inspired by you and Ivy and Maria to try this, though it was too late to go for the Napowrimo challenge since I was away for the first week of April.

Dale, yes, sweet, I tried lots of synonyms and none would do, the word kept recurring...