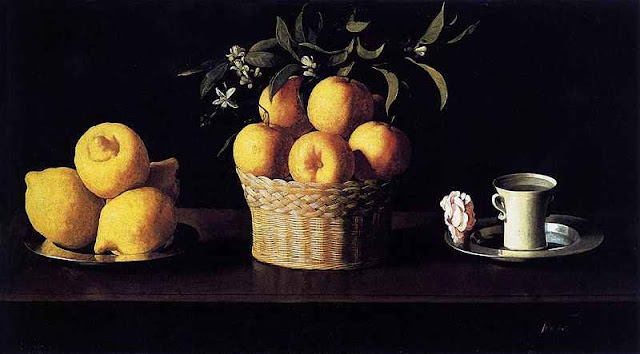 "The first time I saw Zurbarán's Lemons, Oranges, and a Rose... I had a very strong reaction to the picture... I cannot track the initial unconscious milliseconds of my response to the picture, but I knew its image hit me instantly and bodily, and had some person been there to measure the activation of my sympathetic nervous system that had sped up my heart rate and increased the sweat levels in my skin, he would have pronounced me in a state of heightened emotion and attention.

Why? How can four lemons in a silver saucer, oranges in a basket, a rose, and a teacup filled with water sitting on another silver saucer create such a physical change?... They appear to be in hyperfocus, to be more defined, more perfectly clear than things in the world... the objects are illuminated by a light that represents no time of day or light source we could ever name... They are fictions in a fictitious world, an imaginary elsewhere that has opened up before our eyes... They are enchanted by the artist's intentionality - a force that is prereflective and reflective, one that I engage with as a distinct presence of another human being, albeit the ghost of that other, that absent you.

The longer I looked at it, the stranger and more mysterious the image became... After that initial startle response, my nervous system quieted down and the stillness and silence of the things represented... and of the medium itself... acted on me like a balm, and I fell into a kind of reverie typical of art viewers, an active, ongoing, shifting, physical, mental response to what I was seeing, one that included emotion... It is a feeling that I often had as a child and still have from time to time, and on occasion it is accompanied by a strong lifting sensation inside me, as if I am rising up and out of myself. This Zurbarán brings me back to that emotional state, and so a part of my response to the picture is an active projection or, to use the psychoanalytic term, a form of transference of my memories and of my lived past onto the painting."

This is from Siri Hustvedt ’s new book, Living, Thinking, Looking - collected articles and essays 2006-2011. Another brilliant, much loved woman writer of my own generation, but Siri Hustvedt is not much like any of the three writers I recently quoted here. My love for her work is wider, less specific than my gratitude to them. I’ve read her two long mature novels, What I Loved and Sorrows of an American, three or four times each and know I’ll go back to them again and again. Her Mysteries of the Rectangle, essays on paintings, is my favourite writing by anyone about art. And her writing on migraine, psychology and psychoanalysis and a raft of other gripping issues impresses, enchants and moves me no less. The new book is wonderful: the force and nuance and quirkiness of her ideas, her sentences, her metaphors – this is a mind that rarely fails to take mine on a rewarding journey.
Posted by Jean at 12:39

She sounds like a very interesting writer, I like this, and following the links all her writing sounds intriguing. And the painting itself is great to see again; I'd forgotten about Zurbaran, the still lifes especially are wonderful but also those praying monks, sombre but not oppressive.

I was struck by this extract. I've never had such a strong reaction to any painting (fondness and understanding grows gradually in me), and yet I could 'feel' Siri's reaction through her words - how did she do it?

Thank you for sharing this, Jean. I haven't read any of Siri Hustvedt's works, but this makes me want to start exploring soon.

Parmanu (and Lucy, should you happen to read this so long after you commented), I would recommend What I Loved as a very fine novel indeed - both very cerebral, full of thoughts and concepts about art, and deeply, though not indulgently emotional: a fine evocation of personalities, relationships and feelings.