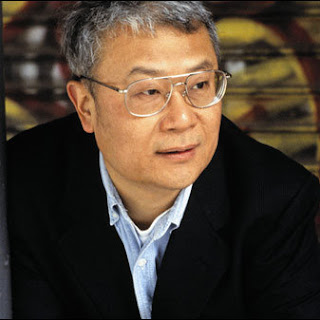 This week, on the bus, I've been reading Ha Jin's ironically titled novel, A Free Life. Some time ago, I read Waiting, his coolly devastating novel about people and relationships destroyed by the Cultural Revolution in 1960s China. A Free Life is the equally clear-eyed and disturbing story of a post-1989 Chinese immigrant life in the US - not, or not entirely, his own story, but one drawing certainly on intimate knowledge of how it is for an intense, intellectual person to start again as an immigrant in a new and vastly different language and culture.

This is a wonderful novel, for its sharp and subtle social observation, its complex and equally subtle characterisation. The story of troubled, but ultimately resilient would-be poet Nan Liu, who spends more than a decade slaving with his wife, Pingping, to own a home and build a business (the classic aspirational immigrant story), hates himself for accepting a life with no time to write and finally gives it all up and takes a job as a night desk clerk in a motel that allows him that time, is compelling and unforgettable. Nan is not the immigrant stereotype and neither indeed are any of the other characters so tenderly, but unsentimentally drawn.

It's a tribute to Ha Jin's great skill with story and character that the trouble I have with his language did not decisively diminish my pleasure in the novel. I do have a bit of a problem with his writing style. He's a university professor of English literature and author of many books of prose and poetry in English, so it's not that the language is in any way limited or unsophisticated - far from it. The issue is much more subtle and therefore perhaps more troubling. I kept wondering: what is it that's not quite right? It is, I think, not quite the right voice or register for a novel (and who can define what that is? but I think one can feel it). Worse, the voice and register are uneven, across the book and also within a single sentence or paragraph. A good editor could have worked with the writer to fix this, surely. I have to assume that they chose not to, thought the ever-so-slightly-offness was a plus and not a minus, that it lent a stimulating jaggedness to the narrative. I can't agree. I suppose this is much the same disagreement that I have with some translators of fiction: the 'domestication' versus 'foreignisation' debate. It's a difficult issue. When reading an absorbing novel, the feeling comes first. Once one starts to think, it's not so clear-cut. Perhaps my view is not politically correct, in which case I've finally found an area where I can't go along with political correctness. I know I'm only bothered by this because I find so much else here to love, admire and enjoy.

When the novel was published in 2007, John Updike reviewed it for the New Yorker and I see that, unlike many reviewers, he did dwell on the language issue. He highlights different aspects, though: the odd, unexpected (to a native English-speaker) choices of vocabulary or metaphor, which I actually didn't find grating, but on the contrary enriching.

A big novel that very much engages the reader will give rise to many very personal responses. This is a big novel in every sense: a memorable, satisfying novel. Whilst very different in kind, its overall project is similar to that of The Transit of Venus: nothing less than to dramatise through a small cast of characters all the hardship, the tragedy and the consolations of life in a particular time and place. Like The Transit of Venus, it is remarkably, unusually successful in this. I can't wait to read more of Ha Jin's work.
Posted by Jean at 17:34

Wonderful review, Jean. I almost never read novels anymore, but I may make an exception for this.

I haven't read Ha Jin's books, and this is a bit off-topic, but in the 1980s I knew a Chinese girl (then about 25) whose sister, ten years older than she was, was a very promising ballerina in China, but was caught up in the Cultural Revolution and had to go into the countryside and work on farms for about ten years (I don't know what happened to her afterwards). What a tragic waste of talent, ordered by a mad elite.

Dale, wow. Well, impossible to know if someone else will share one's love of a novel. I think though that, like me, you would identify with Nan Liu, who is a wonderfully drawn character.

Vivien, I know a few Chinese people my own age and slightly older (late fifties and early sixties) who were 'sent to the countryside'. They're all gentle, openminded people with a wry appreciation of their subsequent careers and opportunities. Of course, the people I meet in my work with a university in China are among those who recovered - so many didn't survive or survived but did not recover. It seems a very good thing that novels and films about the cultural revolution, like Ha Jin's Waiting, have been and still are very popular in China as well as outside.

This is fascinating, Jean. I have the same problem with Ha Jin's use of language that you do, but I've never been able to put my finger on it. I like his books very much in spite of this - haven't read this one yet but I will. (Met him in person once at a book festival - got the impression that he's a very kind, nice man.)