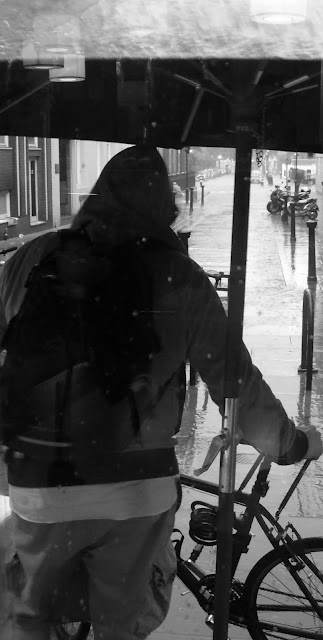 Raining hard this morning, the smell of petrichor replaced by damp exhaust fumes, and I feel chilled and assaulted by it, reminded of my mother and the way she always took the weather personally - how absurd and infuriating I found that, how victimised and bitter she must have felt.
Do I feel then, these days, just as victimised and bitter? Probably. The best I can do is try and not take it out on others the way she did, not spread the same twisted misery around me (except here - sorry).

The middle of summer, and I have a fearsome workload, as usual, but no immediate deadlines - up to me how I organise and prioritise it all for completion in the next four or five weeks; up to me, more or less, how many hours I work, since there's untaken holiday.

I have just enough energy to rage at the slowly trudging through it, not getting any more behind at least, that is all I can manage. Just enough to wish I could seize my life and shake it, do better than this for god's sake, but not enough to act.

Not sleeping much, too vague and numb to read much, even more alone than usual with most friends and acquaintances away. Intermittently horror-struck at the thought of the relentless cycling round into a new academic year.

Cope, breathe, cope, so tired of it all, and now soaked and coldly clammy at the edges... hard not to take it personally. Hard not to furl my umbrella, lie down in the soggy street and let it rain on me, rain on me, wash me away. And thinking, damply and with shame (yes, of course I am), of Pakistan.
Posted by Jean at 12:27

Laugh, that humans somehow think we can change the weather by complaining about it. And we do, or why would we get so worked up about it?

Taking the weather personally is something everyone in my family always did. I thought it was a Russian or French thing. I always admired the British way of taking it as merely conversational material and one of the many things one "mustn't grumble" about.
On the other hand, bravo for good grumbles!

I think August is a pig of a month. It ought to be relaxing but it is so often dreary and hard work and nothingy (with a negative edge). I've come to think of plodding along as a good speed, though - not fast enough for fatal errors, not slow enough to be confused with apathy. Just gentle progress.

It must have been hard as a child to see your mother rage against the weather, because it's the structure that enters the child's soul: my mother is victimised by external factors she can do nothing about (so am I one of those, too?). It's tough under any circumstances to see one's mother not coping, but not coping under trivial, illogical circumstances? Well that goes straight into the child because he or she has no defences of reason against it - it gains a supernatural power. Have yourself a little ritual and banish the weather gods, take your power back.

And hugs in the meantime.

I had a very busy job at UCL (admin) in the 1990s for six years - the department got busier and busier and in the end I left - couldn't take the pressure any more of my arms continually flailing around dealing with incoming torrents of pieces of paper! (I blame giant photocopiers, partly - also massive expansion of university education without corresponding expansion of admin staff). I expect people are inundated with emails now. The manic business seems to have started in the late 80s - an academic said to me that it was so much easier before that -she and colleagues could talk to each other more and sometimes see a film in the afternoon and discuss it. Also they didn't have the barmy Research Assessment Exercise, where people who are very good at teaching are forced to write articles that hardly anyone reads.

About the weather, and its usefulness for small talk in England, I once said to an Israeli woman "What small talk do you have in Israel, with clear blue skies for months on end, unlike in England?" She thought for a bit, and said "I don't know - oh God, maybe we have no small talk!" I asked an Italian the same question and she said their small talk tends to be about relatives.