One of the weirdest things about living in a megalopolis is that you never go to most of it. You have your habitual tracks between where you live, where you work, where you know someone and a few preferred public places - your private, sticky snail trails on which you persistently criss-cross the city, while the rest of it exists only as a vague hypothesis in far recesses of your mind.

Today, to get to the Comiket Festival at the Bishopsgate Institute near Liverpool Street Station (of which more later), I caught a bus and then walked right across the City financial district, which felt odd both because it's so busy all week and so quiet at the weekend and because I never go there now, on busy days or quiet days.

There have been times when one of my trails came this way, when necessity compelled me to take a short-term job in some corner of the financial world. That job with the Argentinian banker, for example, in a pleasant, old converted house - long since demolished - in a street with the wonderful name of Crutched Friars (which is even better with a heavy Hispanic accent). That was so long ago - time and space slip and slide on a long-disused snail trail. 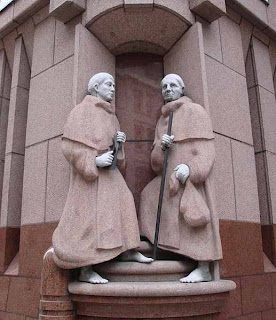 photo of Crutched Friars statue in the street of that name from Wikipedia
Posted by Jean at 19:21

What a wonderful description, this 'snail trails'. I do believe that they are many parts of my own city that I've not been to, and it isn't as huge as London.

And that is a wonderful name for a street, and I like the statues, the use of two colours makes them stand out.

I must admit I've never seen the statues - they belong to a building erected in the wholesale redevelopment that happened some years after I worked in Crutched Friars. Rather nice statues, though.

Yes, snail trails exactly. Like that cartoon map of the USA which was on the cover of the New Yorker once - was it drawn by Spiegelman? I think it showed N.Y. taking up most of the space!
My snail-trail would be very small indeed.

Glad you broke out and came to Comiket!