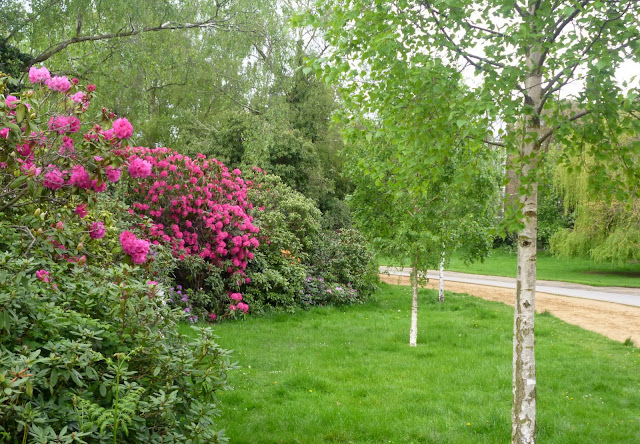 These weeks of almost unremitting cloud and frequent heavy rain have been a bit depressing, but they make for lush and subtle greenery, of course - a continuing glory of this grumpy, confused old country and its near neighbours. When the clouds thin and briefly part, the pale sunshine glancing off all this green is a timeless gossamer dream. A deep collective memory sighs and reaches out to the passing moment. Well, it could. Sometimes it does. But all too often an obsessive awareness of one's own - my own - individual inner climate stands between.

The way I feel is... well, since deciding six months ago to leave my job there hasn't been a conscious moment when I haven't felt sick with fear. This is probably not literally true: my attention must often have been taken elsewhere. But it feels true. It's rational fear to some extent since leaving the job at this difficult, crazy time is clearly a big risk and, although there are some positive indications, there's no knowing how things will turn out. It's also desperately unhelpful. I'm not dying and not powerless (and if I was dying what a waste of life such fear would be). Fear changes nothing and consumes vast amounts of needed energy and confidence.

So why so much fear? I think it stems from guilt, from the suspicion that I made a self-indulgent choice and and so deserve the worst. I felt a lot of other things before, some of them horrible, but mostly not fear, or only short-term fear: afraid I can't get out of bed, can't cope today; oh, now I have: ok, fear over - that kind of thing. Now it's endless, an ever-present aspect of the new reality. And it's nuts, for this is my one life, too precious to spend it being afraid, especially when nothing frightening has happened yet. I suppose I could resort to anti-anxiety medication, and I don't rule that out. Meanwhile, breathe into it and slowly, deliberately try to act as if I didn't feel this way.

The fear is in my throat and belly, and recently in my back. I've never had backache, or any of the aches and pains in bones and joints and muscles to which my age-group may be prey. I get severe and frequent headaches and migraine and it's been as if the body's need to express pain was focused in my head and therefore had no need to manifest elsewhere. These past few weeks, the headaches have slowly started to abate for the first time in many years. Pain, meanwhile, seized my lumbar vertebrae. On the retreat, sitting fulltime with a crazy, fearful mind, there was none of the familiar stiff shoulders and sore knees from sitting still, but this new pain flowered lushly and shockingly half way down my spine, then faded a few days later. As I wrote this blogpost, a week after returning from retreat, it came back suddenly and violently (and, yes, when the words had been set down it left again).

There's no escape from fear, it seems. I used to escape briefly, gratefully, totally, after work into novels, films and radio programmes, and (excessively) into food. Well, these - or I - have changed. While still pleasures, they no longer make the rest disappear. Paradoxically, when life is mostly a relentless discipline, is it easier to fully embrace the moments which are not? I suppose the lack of wider choices, the clear limitation of such moments, while removing hope, also removes responsibility and uncertainty. If the moment's all there is, you have to grasp it. (But it's always all there is, stupid!).

Perhaps I shouldn't blog this. The haiku poets counsel us to find an image, not indulge in drear, abstract description of emotions. Writing has been very difficult, and of course it's one of the main things I'd longed to do more of. Perhaps I need to give words, any words, to this stuff before I can give words to anything else. When I first started blogging - not here - I wrote something very personal and emotional about my past and family. It was chosen as some kind of 'post of the week'. To write it down and have it read was helpful in some concrete way and I never needed to do so again. So, in that spirit...
Posted by Jean at 11:21

It's impossible to defeat something you don't confront.

Hopefully this is another step in becoming who you were meant to become.

Jean, do keep writing whatever you wish, if it helps. Wishing you strength in this path. And please keep on taking photos, they are so lovely.

You're feeling the fear you used to feel as a child when you did something you shouldn't, or something your parents would have preferred you not to. Only you were too little to process the fear and so it got stored, to come back now. The aches you feel are also deep stored memories - you are working through, in that time old phase.

This is what I was told when I felt very much the same as you do, and once I had had time to think about it all, it helped. Now you have to learn how to soothe yourself (which lots of children don't learn, internalising the parental harshness instead). The first step for me was to realise I could soothe myself - that it was allowed. I didn't have to wallow in pain and uncertainty.

I confess, though, that it all went much faster for me with anti-anxiety medication. I take 50mg of dosulepin - no side effects, no problems but a huge release in terms of feeling sane and myself. I hesitated long and hard over medication, and still wonder when I will have the courage to give it up. But it's a tiny dose and I'm still glad I take it, as it helps enormously.

I know all too well how all this feels, Jean, but it IS progress, and you WILL get beyond it. It takes immense courage to face the truth of one's feelings. You are going to rescue yourself. I send love and hugs while you scale the mountain.

I have found that writing out my fears does help, but only if I very intentionally leave them in the words.

Yes, writing them down helps me too. Wishing you the best, Jean. And I agree with Marja-Leena, please do keep sharing your photographs with us. I don't know if you'd agree that these much recent, post-retreat photographs seem lighter, more present, more colorful and less depressed, but they certainly seems that way to me than some from the last very difficult year.

I always enjoy seeing your photographs - vignettes which most of us would pass by, and always with a rather mysterious emotional content. I'm sure you could exhibit them. You made the right choice in your new life, I think - "first the pain, then the gain"!

Loren, thank you for those wise words. And for your recent death poem. And for being you - a bit older than me and a lot wiser and more courageous.

Litlove, meeting your mind, such an intellect in the service of emotional honesty, has been one of the Internet's great gifts. Thank you - I'll ponder all your words.

Beth, that's a very interesting thought about photos. I don't THINK much about taking or posting photos - that's the whole point; they come from another level of consciousness and perception - so there may well be something in what you say.

Marja-Leena, Zhoen, Vivien, thank you all so much for reading and for your warmth and sensitivity.

Ah yes, I recognise this all too well. I know it as the "ditch" worry, the one where I imagine I shall run out of money and die in a ditch. It still scares me sometimes, but over the past year it's lost its intensity. Journalling has helped me a lot, as has putting together lists of the things I'd love to do.

It will get better, I promise; these are growing pains on the way to a new life.

I find that it helps to make a friend of the fear, the anger, the sadness, the grief--whatever comes up. I think those feelings are doing their best to help us, but in misguided ways. Fear, generally, is trying to protect me from some imagined--or unimaginable--disaster. I say, thanks very much for the help, but I just don't need it right now. Then I can put it to use in a positive way, to get the edge of risk I need for my creative work. I hope this doesn't sound glib, but it really works for me. Until the fear wins out...

Your note was very moving, leaving one with the strong desire to say at least something, but completely paralyzed as to just how to go about saying anything useful. . .

"Fear" is subject to rational discussion: Whatever it's about probably won't happen, and if it does, one will forget about it in short order anyway. But "anxiety" isn't; it's constant and self-generating and corrosive. Sure, it may look similar; it has to have some apparent external objective cause to point to---but that's just the mind feeling the need to provide some plausible account of the tightness in the chest and the twisting of the stomach; when the cause goes away it's immediately replaced with something else . . .

It only seems possible to anesthetize it--for example, by submersion in work (like writing) that requires focused thought and imagination even in odd moments (as in the shower). Or by the grace of being able to stand for a few minutes alone in front of a painting and and somehow float outside oneself. Or by a good single malt. . . But these are ultimately just distractions, and as Johnson said, "every submission to our fear enlarges its dominion."

I do hope that we will be able to have some encouraging news from you soon.

I have no words of wisdom or comfort to offer, and don't in any case feel I have the right, but the guilt, at lack of role, I remember feeling at various times in my life, when responsibilities were relinquished. I assume that to be relatively 'normal' for us humans (although my hisband denies such a thought, thinking our only purpose to be biological)

I don't quite know what to say here, except: Keep writing, Jean.