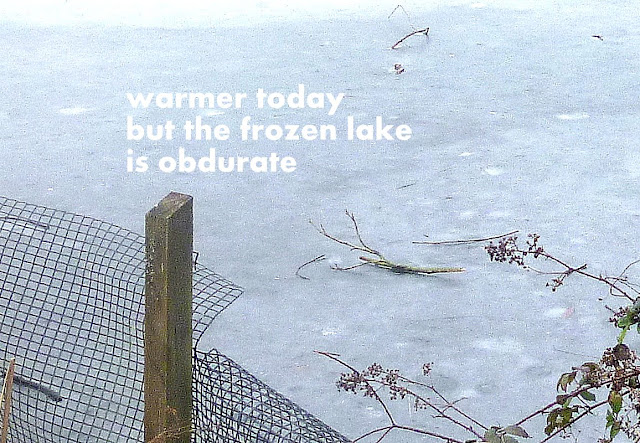 In the struggle ﻿to come out of my head and feel the world, taking photographs is crucial. In the moment of taking, that's all there is, no division between the object and me. Making pictures with words can be the same, as in haiku practice, focusing tightly on one thing, one moment, with no space for comment. While traditional haiku discourage adjectives, playing on the fringes of tradition I often want to use an adjective as marker of intensification or abstraction, to evoke the taste of an object, scene or place. Behind a camera, behind your pen or keyboard, you can't touch, but you can taste, as well as hear and see - taste literally, the air, but also metaphorically, the mood and associations of an object. There's the taste of words themselves too, their shape and tenor on the tongue: words like obdurate, its consonants and vowels so... obdurate, so hard and icy and determined.

This (photo taken back in February) is a small submission to the next >Language >Place blog carnival. Forthcoming ﻿Edition #14 will be hosted by writer / poet / haiku poet Stella Pierides, with a special theme of 'locating the senses in language and place' - more info here. The deadline for submissions is Thursday 15 March.

I like the taste of words, too. And this frozen photograph. It makes me want to write something down.