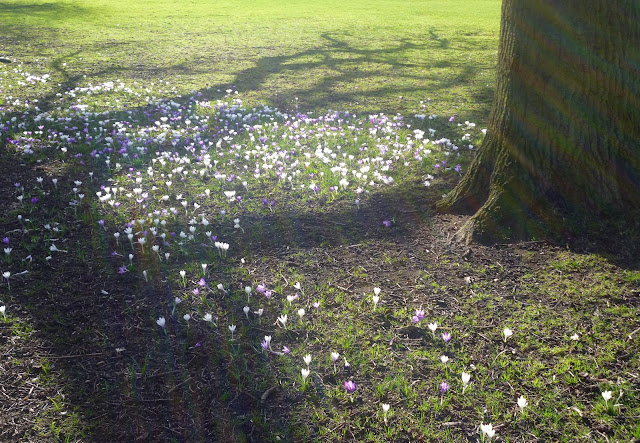 Less than two weeks. Look, stop it!, I tell myself, this fear is out of all proportion! Apparently my stupid subconscious feels I don't deserve a better life and I'll be punished for reaching out to one - closer than ever, at close to sixty, to the six-year-old who placed herself in a corner, having been told so often she was VERY BAD. So close, I think of her and tremble. Ugh. The better things go, the more encouraging the work leads, the more ideas for the future business, its name and mission statement and strategy, the more real it all becomes, the greater the fear. And we're not just talking fantasies of professional failure and destitution here. Oh no. It's all about death. My mind fills with images of pain, implosion, physical decay. Last night I dreamt my skull was cracked across the front, with pieces breaking off like a cracked eggshell. I would say meditation isn't helping. Nothing's helping. Except that I suppose it probably is, since I'm still functioning and mostly managing not to yell at anyone. Anyway, there's no choice. All the boats are burned. No choice but to feel this stuff and do it anyway.
Posted by Jean at 18:10

Jean, I'm sure a major change in one's life can be both exhilarating and frightening. Aren't we humans strange with our mixed emotions? Wishing you strength and courage to follow this new path for you will find it a happier place - and no more bad dreams, hopefully!

Sorry to hear about the suffering that goes along with the change, Jean. If it's any comfort, I've been preoccupied with mortality this whole year, as I come closer to 60 in September. I've wondered if it's a fear that there won't be time to enjoy the changes in my own life. The only help has been to try to laugh at myself, and try to stay in the moment. Hugs from here, too.

And maybe you're in the habit of defining all wrought-up anticipation as fear? Excitement doesn't really feel all that much different!

Death of course is dawdling around the corner from all of us -- I think it's likely he was loitering closer to you in the old life than he will be in the new.

I couldn't believe, really, that I could have a new life and be happier. But I could and I did. It's almost embarrassing, how much happier I am now: I feel such a fool for waiting so long. You're one of the main people who helped me get my courage up to do it, you know.

change is a death of sorts. with all the fear that fear of death brings. you are ALIVE, alive with possibilities and the desire for something more....

all good wishes to you.

I think you not only wanted this change but need it, for your soul! It may be scary, something so new and different, but I do feel it'll be the right road for you.

Getting nearish 60 is comparatively young these days (ah, wish I were that age again! - I'm a few years on). When you think how middle-aged many women of even 35 looked in the 1950s, it's obvious what an enormous change there's been.

Anyway, hope you can keep as calm as possible, and all best wishes.

As Vivien said, wish I was as young as you! Nevertheless, something in me still refuses to identify with all the baggage that surrounds the word "old" and the fact of aging and its inevitable conclusion. Maybe I'm in denial but if so, what's wrong with denial? I may wake up with creaking bones every morning but also with enthusiasm for creative work, and so much still to do.
Be glad you've got a new life ahead of you, Jean, anything's possible!

I've been through this myself - the sheer terror of that real opportunity to take the things I needed and wanted but had always denied myself. I have no idea whether this is a road you would want to go down, but my GP prescribed me a low-dose anti-anxiety medicine at the height of my anxiety last year, and it was like a small miracle. With that insistent and obscuring anxiety gone, I suddenly saw clearly ahead and thought, why ever have I been making such a fuss about this? It's PERFECTLY reasonable! And it was like tumblers moving inside my mind, unlocking a vault that had been lurking there for years, storing the ghosts of ancestors past. I was highly reluctant to take anything, really did not want to; but it did help me enormously. You don't need pills, though, that's true, and you are stronger than you think, Jean. The child is doing all your thinking for you at the moment, but you are also a grown woman with significant competences and lots of Sending hugs.

Dear Jean - fellow traveller on this life amazing journey - as you say so clearly in this blog post. Our brains were "washed" early on and when we recognize that, we can conquer all!!

I believe in you and hold you in my thoughts as we tread similar turf if only in different venues and with different dreams.

Much love and many hugs and smiles,
Your old blogger buddy!

Your kind comments all mean a lot. Thanks!

Litlove, Tamar, and especially Dale, you all inspire me!

Jean, hang on in there! There is light and life on the other side, honestly.

Just take small steps through that door, and think of all the freedom ahead.

I'm thinking of you - please email if you'd like to.

Success can be far more terrifying than failure. It's a real rebellion, and it is never too late for it. Annie Proulx didn't start writing fiction until she was just about your age. Of course the 6 yo would feel as she does. What proof does she have of any other possibility? Just what you're making for her, and I know well how hard this is. And yet you're doing it.

Excuse me, may I speak to your 6 year old for a moment?

You are lovely and good, strong and wise. If anyone tells you different, they are talking about themselves, not you. Now, go play and sing and dance.

Thank you, that is all.