This also appears on the Writing Our Way Home blog. The daily guest posts Fiona and Kaspa have been publishing this month for the new River of Stones include some really great and moving, useful stuff. It's a privilege and an ongoing small joy to be part of this movement. 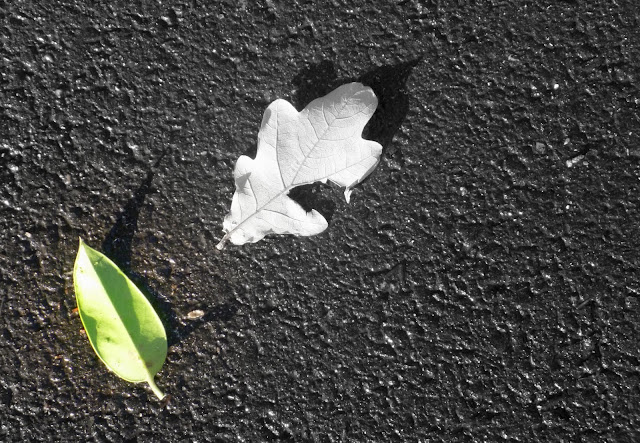 I could write a rather grim summary of 2011, of demanding, difficult, dragging months. But there’s another story, a story that’s also all mine, in the Small Stones I started writing for last January’s River of Stones, and kept up, to my surprise, on a new blog, for most of the ensuing year.

1 January
At 4 pm the daylight's almost gone - a layered, enclosing snail-shell of darkness.

22 January
Just above our heads, the spreading trees hold up the heavy purple sky with their bare arms.

There’s this crashing, storming, multifarious, chaotic, globalised, mediatised world that we find ourselves living in. Deafeningly loud interweaving stories shoot past our eyes and ears, an endless stream of the alternately tragic and trivial. No wonder we’re lured to take refuge in increasingly relentless hard work and routine or, when the energy for this fails, in numb insensibility.

But there are other stories, right before our eyes:

2 February
Inside the front door, a huge sycamore leaf has come to rest: pale-brown and brittle

6 February
A mean wind slaps the house and whips a mass of dirty clouds across the sky.

15 February
She steps fast. The white canvas bag on her shoulder billows, away from her body and back - a single wing.

It’s been finding these other stories, which are also the stories of my life, our lives, that has saved me, I think, in recent years, in late middle age, from despair and decay and opened up an unexpected space for the creativity that, like so many people, I had not revisited since childhood.

It began, perhaps, with learning to practice Buddhist meditation, which proved to be not – as it might at first appear - a turning inwards, but a quiet, persistent turning outwards from the rigid refusals I’d been practising since an unhappy childhood. A new, small but growing capacity to be in the moment and to trust that this moment, right here, was the only one I needed to confront – and I could.

17 March
The grass is a pale-green sea of dewy sunshine. Near the horizon, a white streak of dog.

25 March
The hazy almost-warmth of late afternoon: a dreamscape seen through a voile curtain.

Or perhaps it began with blogging, with the impulse after reading other people for a few months to have a go myself at writing. This meant looking, noticing, noting what I saw. Looking led to buying a camera, and photographing what I saw led to seeing differently, seeing smaller details, to a fuller, but quieter view.

Such a happy new hobby all this was, at its best quietly life-changing. It was also desperately frustrating and a path to renewed appreciation of why we bury ourselves in duty and effort or sink into apathy. To be attentive, to carve out space for seeing, feeling and for creativity, could feel like just another obligation, another drain on resources already spread too thin. This is where the concept I had learned from Buddhists and others of ‘practice’, a modest but steady commitment and removal of choice, was helpful. And it was helpful to try and take writing also as a practice.

30 May
Liquid light pours through a window, flickers like flames across cool shadow and the open, white pages of a book.

13 June
A runner threads her way through the surge of shuffling commuters, lifts a foot and searches, vibrating with quiet energy, for a place to put it down.

2 July
The man in the green dragon suit bends over, carefully packing his groceries into a big back-pack. His stiff, bright-green tail sticks straight up.

Thus far I’d come by myself, and with much inspiration from other writers and bloggers, when I heard about the first River of Stones in January 2011. Convinced in theory of the need to be still, to look closely and to find our own words, I was too often crushed, by work, by information overload, by life in general, too often losing touch with what I knew and finding little space to try and get it back. So little space. But just one moment, one perception, one sentence a day: this surely even I could do?

16 July
Rain on the train window turns the landscape into an unfurling pointilliste fresco.

6 August
A fine and fragile
water glass
with bell-shaped rim -
like drinking from
an open flower.

25 September
In the cafe window, a small old man with skin like a dark, bruised plum and greying, wispy corn-rows sits rocking and staring out.

It has helped. It has fed into other small creative efforts. I’d like to think it has affected, just a little, the way I approach every day. I’m still doing it, on and off. I don’t know how long for, but every time I do, I’m glad. It’s a game, a trail. It changes, trying different forms, shorter and longer (but not too long, the longer ones, I see in retrospect, are the least focused and satisfying), winding sentences and tiny poems. Looking back across my own small river of ‘stones’, I’m immensely glad of this other, quieter story of the past year.

28 October
Early morning streets
muffled in a striped blanket
of moon and mist.

9 November
His face in the rain -
a sleeping bag gives
scant shelter.

22 November
A black dog runs
beside a bicycle -
blur of legs and spokes.
Posted by Jean at 13:30

"every time I do I'm glad" - yes I feel like this too, and miss it when for whatever reason I let it lapse. And it is pleasing too how many of them seem in hindsight to be things of some small merit.
And your small stones are ones I look for daly.

Your small stones are consistently wonderful.

Jean, your writings and your photos are always wonderful to me, and this post is most inspiring. The little acts of seeing more closely and of creativity are so good for the soul. I hope this year will be a little easier.

Jean, thank you for writing this story behind your own small stones and for giving us these wonderful excerpts from last year. I hope you know that your own practice helps many of us keep going too, in spite of everything that conspires to derail, distract, and discourage us. "Surely I can do this much" -- yes, and even when we fail, to begin again.

Tasting rhubarb was a must-read blog for me even before last year, but the small stones have been, as the samples in this post demonstrate, a very welcome addition to the mix.

This is so true. Carving out even a sentence's worth of space is so important. I wrote daily until late August and then stopped. By year's end I missed it terribly. You really put your finger on why.