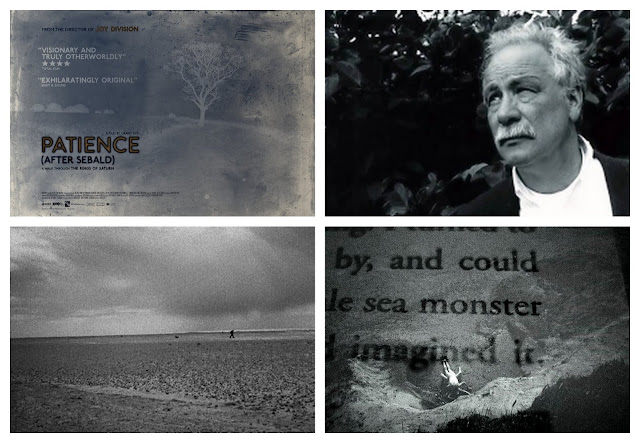 Asked about the title of his film based on W G Sebald’s book,The Rings of Saturn, Grant Gee has referred to a moment in another of the writer’s great works, Austerlitz, where a man is described arranging postcards on a table: “It is as if he is playing a game of patience, as if the right arrangement of images were the key to a trauma.”

I’d looked forward for months to seeing the film, produced in conjuction with Artevents, whose work consistently excites me, and premiered at a weekend event in homage to Sebald back last summer. I enjoyed it very much; it’s lovely, but a frustrating hotchpotch: gorgeous, mostly black and white photography and a rich array of some of our most articulate writers and intellectuals: Andrew Motion, Adam Phillips, Robert MacFarlane, Tacita Dean, Marina Warner, Iain Sinclair and more, speaking eloquently about Sebald, The Rings of Saturn and their own engagement and fandom.

The skeleton of the book is a hundred-mile walk in Suffolk, not far from Sebald’s home in rural Norfolk, both anchored in place and anything but anchored, taking off, like all his work, into the geography, history and memory of change, suffering and exile. The landscape, endlessly strange, specific and evocative, is wonderfully captured in in Grant Gee’s grainy black and white film with coloured insets and superimpositions. He walked with a heavy backpack full of equipment and shot it all himself and the result is both stark and subtle.

The talking heads are skilfully woven into the flow of the landscape and this is visually beautiful and absorbing. But I found it, in the end, too rich an array of voices and views, so diffuse that it overrides the shape of the walking route, but doesn’t really carve a deeper shape. While I warmed to the modesty with which the film-maker, present at last night’s showing, described his lack of pre-planned structure, his surrender to content, contributors and serendipity, I wished he might have brought more of his own intellectual perspective to bear, as he did his consistently engaging aesthetic.

Quite why Sebald inspires so many other artists and writers, quite what their heartfelt tributes add to his work or their own, I’m not sure. Still, I love that so many talented thinkers love his gentle, difficult books and find, as I do, a surprising refuge in his bleakness. It all takes place, and takes you to a place, radically far from any mainstream contemporary discourse. I’m tired and ill and scared, with a constant headache. After a couple of hours submerged in this, I came up cleansed and gentled, liberated from the headache into something more complex, less tight and egocentric, part of a many-levelled common heartache.

Video interview with Grant Gee and more film of the Suffolk locations
Posted by Jean at 14:00

What an excellent review of what sounded a fascinating weekend. I appreciate, rather than love, Sebald's book. You have made me wish to return to it, and I shall look forward to seeking out this film.