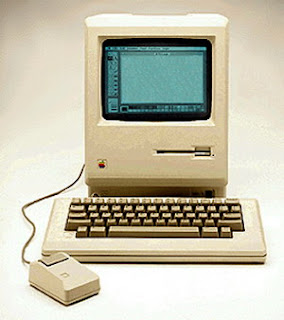 In the mid 1980s I went to work for the small, under-resourced, but occasionally extravagant London secretariat of a global political network and my working life began to fill with exotic new people, objects and experiences that were to make the following decade and more both wonderful and nightmarish. One of those exotic new objects, a few months into the job, was an Apple Mac computer. We were early adopters. It was my first computer: a serial love affair that continued for the whole time I worked there, and I miss them still, my morphing parade of appley better halves. I’m long since reconciled to life with a PC, but it’s never been the same – like leaving a land of sweet little purebred stallions for one of shambling but serviceable donkeys. Long before laptops were conceived of, those early Macs –  smooth and chunky and lovable and quickly grubby grey-beige boxes about 9 x 9 x 12 inches – flew with us to conferences in Africa, Latin America and Australia. Many’s the overnight flight I’ve spent with one parked under my feet (cramped uncomfortably in an Economy-class seat, I still find myself thinking: well, at least…). So many feelings and memories: not unmixed, but far from the grateful-but-alienated emotions inspired by the current PC and other techno-tools. I feel rather old, remembering 1985 and my first Mac - a few months older than Steve Jobs, who was too young to die, wasn't he?
Posted by Jean at 12:36

You traveled on a plane with one of those early Macs next to your feet? I am burning with envy!

Too young to die, yes, but he left us all with the gifts of his visions, his dreams.

As soon as D needed to replace the Atari, we got a Mac, and have had them ever since.

I got to hear Steve Jobs speak at Macworld, and he really was impressive. No one lives long with that kind of cancer, though. He got what everyone gets, a lifetime. He made more of his than most.

Parmanu, unfortunately, I didn't know I was cramped in my aeroplane seat with what would become an iconic object :)

Zhoen, I never had an Atari or one of the really early ones...