Reality stutters at the edge of abstraction 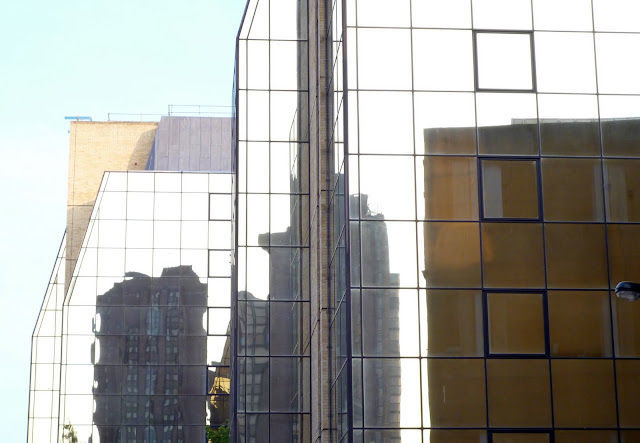 One of the things that attracts me to the facades of Webber Street is their apparent two-dimensionality, a certain lightness and liberation in this. There's the third dimension of reflection, of course, but this somehow removes from perception the ordinary three-dimensionality of the street. Soon after taking these photos, I came, quite by chance, upon mention of a book of photos and critical theory: Unmapping the City: Perspective of Flatness, works by Alfredo Cramerotti and accompanying essays by Jonathan Willett, which seem to be addressing precisely this. It's clearly a book of heavy theory - perhaps a bit much for me. But I read the extracts given, along with a selection of photos, here with some recognition and excitement.


"The photographic effect is is to deconstruct the three-dimensional built environment in 'perspectives of flatness', which in turn re-construct a sensibility toward the concrete, rationalized spaces of urban cartography."

"Emerging from the social and historical complexities of the urban environment are a thousand cities of the imagination, as the shadow architectures of perception: these other places are the yet to be experienced vicinities of the city, the interstitial places that materialize in the gaps betweem 'perspective seeing' and 'perspective knowing'."

"reality stutters at the edge of abstraction"

Another, brighter selection of Cramerotti's photos is here. So many reasons why the city building-scape might veer, often does, towards the overwhelming and unreal - this is perhaps one tangible aspect, which, if engaged with, becomes less alienating and more potentially creative. "The 'perspective of flatness' becomes a means of negotiating the conditions of contemporary urban life": I think this is a direction I have sometimes taken all unconsciously. It's interesting that taking pictures has perhaps led to somewhere I would never have arrived at through words.
Posted by Jean at 12:39

Not sure I understand all this (not being a photographer) but from what I have seen of your pictures I think your conclusion could well be right.

I love this thought 'a thousand cities of the imagination'
I'd never thought of that and 'reality stutter(ing) at the edge of abstraction'... really interesting.

How interesting. And I wonder how it connects with the flatness of vision--it's our brain that reinterprets it into 3d.