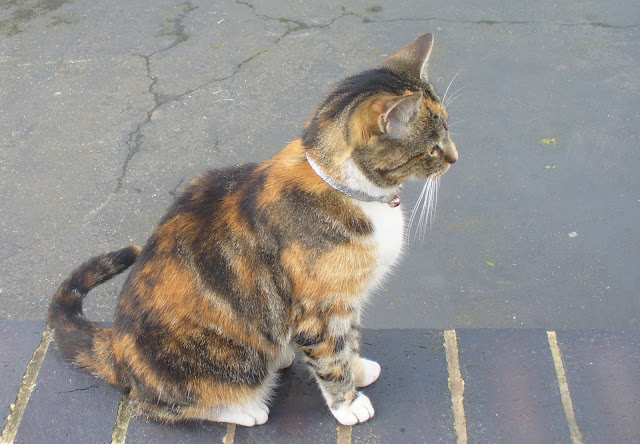 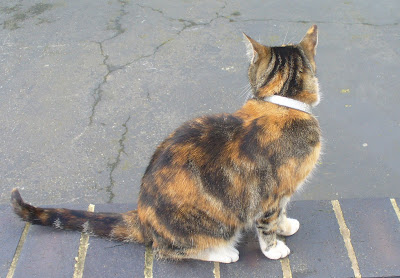 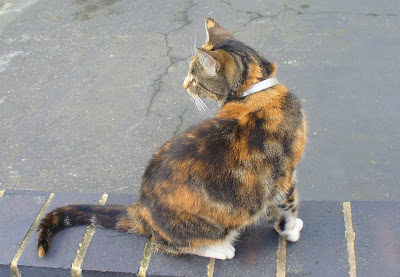 ﻿First encountered some months ago, she lives not far from me. I'm irrationally but completely convinced that this fine feline specimen is female.  (Update: apparently not irrationally - see comments!)
Posted by Jean at 13:26

Not random or unfounded - because of cat genetics, nearly all tortoiseshell and calico (as this one is) cats are female, and nearly all pure ginger cats are male. You might not have 'known' that but you've probably noticed it :)

But basically the (rarer) O gene that turns black pigment orange is carried in the X chromosome. A boy cat can have the O gene in the X part, and his Y chromosome won't override it. A girl cat needs to have both X chromosomes have the O gene in order to be ginger. If she has one O and one non-O then she will be ginger-white, tortoiseshell or calico depending on whether the other gene is for white, black or a mix. Again, pure white is very rare, so most are tortoiseshell or calico (black-and-white is semi-dominant over just black and just white).

Boy tortoiseshell / calico cats always have a genetic abnormality - they tend to have an extra chromosome and be XXY or XYY.

The distinctive 'magpie' markings on black and white cats are thought to be caused by the way the pigment cells spread as the embryo forms. If you imagine having a rolled up sock and dipping one side in black paint before unfolding it, your sock puppet would nearly always have a white nose and white tail etc.

I'm afraid that's the end of my cat pigmentation knowledge... I'm was quite interested in pigmentation because I'm a piebald myself. I hadn't really thought much of it until one of the doctors I saw about my lack of growth hormones took a look at me and exclaimed "Well, aren't you wonderfully asymmetric! You know, that always means there's some other underlying genetic abnormality... I wonder what it is!" Charming.

Anyway - you were quite right, and she is quite lovely.

(Ps - word capture is 'decepine' - crying out to be translated! Latin? French?)

She is beautiful -- reminds me of a much-missed childhood cat.

I believe you're right in assuming that she is, indeed, a she -- it seems like nearly all calico/tortoiseshell cats are female.

Ahh! Beaten to the punch by Stray, with proper science and everything!

Thanks! I think I once knew that about tortoiseshell, calico and ginger cats, but had quite forgotten - at least consciously!

Fascinating! I didn't know all pure yellow cats were male, either. Whatever caused it, she's beautiful.

I've heard that a lot of white cats are deaf - don't know if it's true. Isn't it odd how some animals are seen as beautiful: the cat family, deer, most horses, most birds, foxes, most dogs - and yet some are quite honestly ugly to our eyes, e.g. the rhinoceros. Not being rhinocerosist - it developed the way it looks to survive, but it does look ugly to us, likewise the hippopotamus. It might have something to do with small eyes and lots of defensive features. And yet elephants, with similar small eyes, have more beauty - the large ears, a swaying trunk and more graceful walk - and more intelligence I think.

Ah well, would need tomes to go into this! - some philosophers must have written about the mystery of how we perceive beauty.

Have just been watching on BBC2 part two of the wonderful David Attenborough series on the beginnings of animal life.

Thanks for lovely cat photos!

She made me smile, and I learned something from the comments on the genetics of cat colours.

Jean, I remembered this post from before but just came back to look again - she is indeed gorgeous, and quite similar to Manon!

And how weird -- the word verification for this comment is "calio" !