Alice Neel from a safe distance

﻿It's so easy to take nice photos in art galleries because the light is always usually lovely. Taking photos at the Michael Hoppen Gallery reminded me that, being so gutted at the time by the paintings, I never did post anything about the Alice Neel show in London earlier this year and therefore didn't post the photo I took there either.

I still don't know if I can say anything about her paintings. The adjectives come to mind alright: humane, bold, powerful. I love to think that a woman artist did such powerful work and fume to think that she went unrecognised until near the end of her life, that nearly twenty years after her death this was the first major show in Europe. The problem is that, as well as not finding words adequate to my feelings, I can't just point to the paintings. Online reproductions, even those at the excellent website of the Alice Neel estate, don't really give you much idea. You'd think this work, characterised as it is by bold, clear lines, colours and moods, would come across well in reproduction, but really it doesn't.

Above, for instance, is a painting of her daughter-in-law, Ginny, whose mother had just died. It was painted not long before Alice Neel's own death. And it's all there in the painting - breathtaking, primal grief and fear and sadness. It's hard to stand before this painting. It chills your heart. You can't see but a fraction of it's impact here.

Or this one. A portrait of her younger son Hartley, Ginny's husband, as a young medical student assailed by doubts - she left this on record - about whether he was cut out to be a doctor. Here is the posture of openness and vulnerability, but the evocation of that vulnerability in the original painting is almost unbearable.
Or here, in this early portrait of a young man with TB, that rare ability to honour, but not tame suffering, not unlike Robert Bergman's photographs. Not only the portraits have this almost savage power, though they are justly considered her great works. The interiors have it too - the story of the woman artist with young children and no money for childcare; shut in, lonely.
Alice Neel's older son, interviewed in the superb film biography made by her grandson, Andrew Neel, speaks with love but also with bitterness of how the artist, the bohemian, may not be a very safe parent. The film was showing at the Whitechapel Gallery last summer; I had seen it already, sought it out after reading blogger Peter Clothier's review. I liked everything he liked about it, and also everything he didn't - the self-reflective dimension.  I'd never heard of Alice Neel when I read Peter's piece last year, and I'm so glad I read it, or I might have missed the film and later that memorable exhibition which continues to haunt me and to loom large in my perspectives on art.
There is much I could write about colour, line and composition (excellent essay here, one of several on the website) and, of course, about the mid twentieth century as the worst ever time to be a figurative painter. But, even months after seeing the paintings, that's not what I feel like writing about.
I found the photo I took and it made me smile, so obviously in retrospect does it betray the impulse to stand back from and to put a firm frame around these grand, painful paintings! 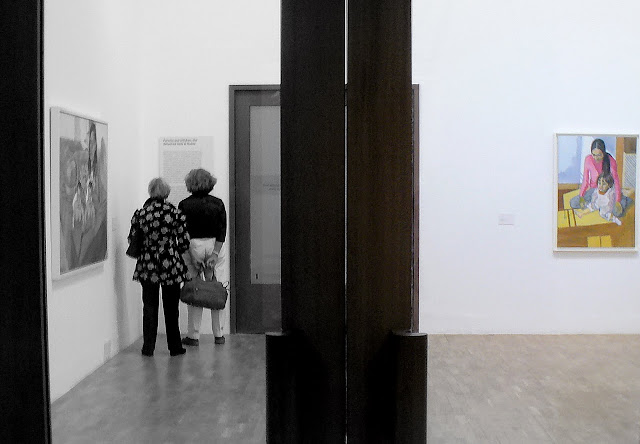 Jean, as always, you bring your own very personal perspective into your reviews and I appreciate this very much. My own response to the Neel exhibition was quite different, though equally impressed.

Jean, you are superb in these essays about literature and art. I wish so much I had seen this exhibition - like you, I didn't know much about Alice Neel but the raw power of these pictures affects and inspires me. My favorite of the ones you've shown is Hartley in the white t-shirt, but I can only imagine what it feels like to see so many of them in one place, and lifesize. Thank you for this really excellent essay!

Terrific photo. I love the black and white with just the brightness of color on the right.

A fine tribute, Jean--and thank you for mentioning my blog. Did I mention in it the evening I once spent with Alice, many years ago? She was every bit the feisty and humane, yet also the insightfully irreverent woman you'd imagine from her pictures. They are all self-portraits, even as they so poignantly portray others. All good things to you... And thanks, as always, for your lovely pictures!