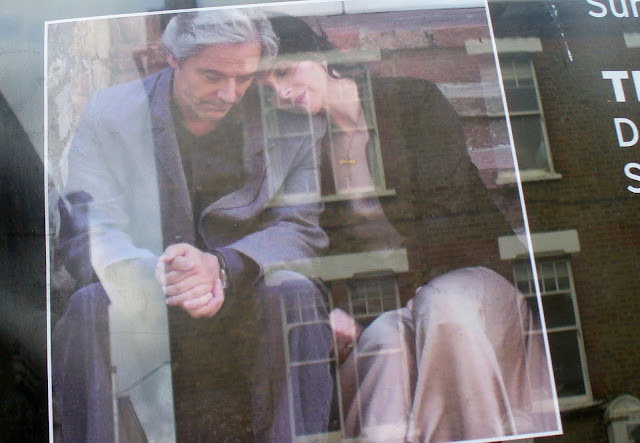 This was my first Kiarostami film. The attractions were Juliette Binoche and Tuscany, and I'm so glad I saw it: gripping, troubling and intelligent.

The story unfurls almost in real time. A middle-aged English man and French woman spend a few hours together. At first their conversation makes us think they are strangers. Then we start to think they are pretending to be a couple. Then that perhaps they are a couple, who at first pretended to be strangers. A couple who separated after something bad happened? Finally, we're not sure it matters - after all, they're only acting, anyway. As all certainties fluctuate, we're just watching two fine actors act (opera singer William Shimell, in his first film role, is a riveting blend of raw and sophisticated and a worthy match for his starry partner), with the additional pleasure of dialogue in French, English and Italian and of a gorgeous setting in rural and small-town Tuscany.  But they make us care a lot about the characters and relationship portrayed, whatever the status of these. As the narrative waivers, the intense macro focus is all on the two personas and their interplay.

I was somewhat reminded of Vanya on 42nd Street, the film of an uncostumed read-through of Chekhov's Uncle Vanya, which I saw some fifteen  years ago and still remember vividly for the powerful way it transports you to a disused theatre in New York and yet simultaneously and not less powerfully to nineteenth-century Russia - the explicit unveiling of the illusion somehow undermining the play not at all, but increasing its depth and poignancy.

Threaded through the story of Certified Copy, which may be the story of a real relationship or of two strangers meeting briefly and pretending to have a relationship, is a discourse on originals and copies of Italian old masters, the male protagonist having written a book on this subject. It's all terribly clever and self-reflective and shows that it is possible to be clever, self-reflective, undermining and provocative without sacrificing the pleasures of involvement and emotion. A fine and difficult balance is successfully achieved -  wonderful stuff, beautifully done.
Posted by Jean at 09:25

I was debating whether to see this after Reading a number of negative reviews, but I think you've persuaded me to give it a chance.

I've been beguiled and infuriated all at the same time by Kiarostami's films but I think he's a great director. We'll look for this one; I've seen both "The Wind Will Carry Us" and "A Taste of Cherry" and want to see his Koker trilogy...hard to imagine him with Binoche and in Tuscany!

Planethalder, I know we often like the same things, and also sometimes do not at all - so will be interested to read what you think in due course!

Beth, I shall look out for some of Kiarostami's other films now, though I think this one is probably very different.

I watched it today! I just had to because it's Abbas and Binoche, and his first movie set outside of Iran. Still debating whether to write something in English or Chinese. And did you know Binoche's next project will be with Jia Zhangke!