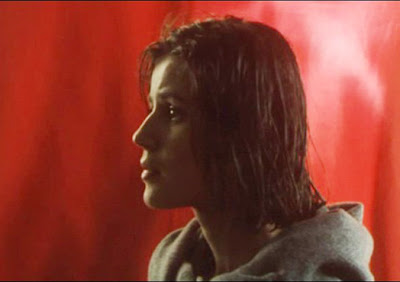 The peerless Irène Jacob in "Three Colours - Red"
Some recent very cheap offers on DVDs led to my acquisition of a boxed set of Éric Rohmer films and all three of Krzysztof Kieślowski's Three Colours trilogy. So the other night I watched Red for the first time in many years (I couldn't find a trailer with English subtitles, but the dialogue is, I think, the least of it here).

So beautiful, deep, attentive. So detailed, but spacious. I felt as though I'd been given something: gorgeous, affecting, lasting images; deep perceptions; new, provocative thoughts. So different from the way films tend to make me feel these days - that my time, attention and emotions have been taken for an hour or two, leaving me depleted.

I love the way the film is full of patterns. The patterns of repeated views and intersecting trajectories in the city, evoking foreshadowing, repetition, familiarity, surprise meetings and converging paths in life.

I loved it the first time, more than a decade ago, and was surprised by how many scenes were still vivid in my mind and felt familiar when I saw them again. At the same time, I was able to appreciate the skill and poetry of the camerawork even more, having learned in the past few years of taking photographs a bit more about visual images and looking.

That sense of being enlarged, rather than depleted, by a work of art is something I want to think about more and be guided by in my consumption of books and films. I think it already guides my viewing of paintings and photographs.
Posted by Jean at 13:05

Being enlarged rather than depleted--yes. I'm going to look for the trilogy.

This is one of a small handful of films that matters very intensely to me.

I've seen it about 5 times, the most magical being on a large screen outside on an island in Germany, one summer's night.

Films that weave themselves into one's life story...

I love it for all the reasons you say: the patterns, the subliminal pressures blooming out into unforgettable work. It was Kieslowski's last film: he quit filmmaking in frustration over not being able to achieve novelistic texture in the medium (and he died, unexpectedly, not long afterwards). He was wrong, of course: he did achieve it, and how.

Huh. I'll have to see it. I didn't take to "Blue" at all. "The Double Life of Veronique" bothered me, ontologically do I mean to say? But gosh, it is rapturously gorgeous, so much so that I left my issues with essence (he seemed to be saying we can share some unspeakable and, to me, entirely dubious identity which must be essence) on the floor like shed clothing. The music half bothered me, but I also half loved it and loved the way (according the provided commentary) the film was built around the music - what an idea how well it works. Maybe I didn't watch it well, but "Blue" and it's music annoyed me. Binoche's composer/character was lit in her presumptive greatness. My splayed, hillbilly ears told me otherwise.

Jean, sorry for venting! Have just joined Netflix I'm so new to complex/deep film (and music- I'll always be new to interesting music) that I am newborn and I am puzzling my way through, trying on opinions, saying more about my own limitations than anything else.

Yes. "Red" will go in my cue. Red has been striking me lately (through my picture taking) as the most interesting color.

I love the last scene in Red, especially after watching the three films consecutively. It makes me grin with deep glee.
I've bought the Eric Rohmer boxed set too - A Tale of Winter is one of my favourite films - but have been struggling to make progress.

I've never seen any of them, though I've known about them for ages... more updating needed for the Amazon wishlist.