Babel: living in our differences 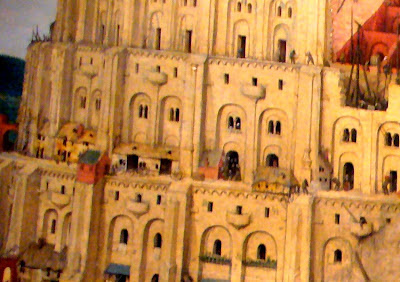 "The ancient biblical image suggests that we live in our differences, emblematically linguistic, on top of one another - like Franck Lloyd Wright's dream of a mile-high apartment building. But common sense tells us our linguistic dispersion cannot be a tower. The geography of our dispersal into many languages is much more horizontal then vertical (or so it seems), with rivers and mountains and valleys, and oceans that lap around the land mass. To translate is to ferry, to bring across.

But maybe there is some truth in the image. A tower has many levels, and the many tenants of this tower are stacked one on top of another. If Babel is anything like other towers, the higher floors are the more coveted. Maybe certain languages occupy whole sections of the upper floors, the great rooms and commanding terraces. And other languages and their literary products are confined to lower floors, low ceilings, blocked views."

Susan Sontag brings new and striking resonances to the ancient image - particularly vivid for me as I'd recently seen Bruegel's astonishing painting in Vienna - in her essay, The World as India, delivered as the 2002 UK St Jerome Lecture on Literary Translation and published in the recent collection of her last speeches and essays, At The Same Time. The book is a breathtaking, poignant tour of an intellect at its peak. 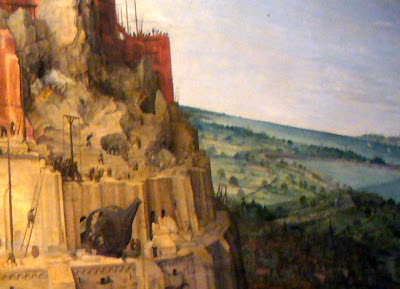 Oh, you are so lucky! One of these days, I might get just that close that painting -- a favorite, for so many reasons.

One of those pat little bible stories that I have often wondered about. A just-so story about how languages developed, or something deeper, darker, more complex?

Have you heard Leonard Cohen's "Tower of Song"? There's a wonderful line in which he tries to communicate with Hank Williams, "one hundred floors above me/in the tower of song." Thanks for this wonderfully intelligent and thought-provoking post!