Deep Country ("forgetting I was there") 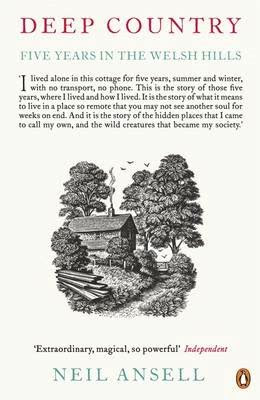 I read with great pleasure this lovely book by Neil Ansell about his five years living alone, with birds, bats and beasts, in an remote cottage in the Welsh hills. Gently, spaciously written, with fine knowledge and perception of the natural world and of birds especially, this takes you right there - it's wonderful. As I began to read, though, I found myself wishing that he'd shared a little of what he'd been doing before, what took a thirty-year-old man to this isolated, basic rural life, why he stayed there for five years and why he left. Then: a quiet corrective.  I'd been looking for the wrong things.

" Solitude did not breed introspection, quite the reverse. My days were spent outside, immersed in nature, watching. I saw as much as I did because of two things: the first, quite simply, was time, the long hours spent out in the field; the second was alertness, a state of heightened attentiveness. My attention was constantly focused away from myself and on to the natural world around me. And my nights were spent sitting in front of the log fire, aimlessly turning a log from time to time and staring at the flickering flames. I would not be thinking of the day just gone; the day was done. And I would not be planning tomorrow; tomorrow would take care of itself. The silence outside was reflected by a growing silence within. Any interior monologue quietened to a whisper, then faded away entirely. I have never practised meditation, but there is a goal in Buddhist practice of achieving a condition of no-mind, a state of being free of thought, and I seemed to have found my way there by accident. I certainly learned to be at ease with myself in the years I spent at Penlan, but it was not by knowing myself better - it was by forgetting I was there. I had become a part of the landscape, a stone."

How short this brought me up before my own sharp and constant self-consciousness. I was reminded of how much this is a product of displacement, how one might aspire not to a happier self-consciousness, but to less of it.

" When I read my notebooks now I can see a dramatic change taking place from beginning to end. For the first year, it is a fairly straightforward diary, an account of where I went, what I did, and how I felt. By the second year it is strictly a nature journal: a record of my sightings and perhaps some notes on the weather. And by the third year it is virtually an almanac: arrival dates for spring and sutumn migrants; nesting records; perhaps interspersed with an occasional piece of prose capturing a fragmentary moment, say a description of the flight of a single bird. I have disappeared entirely from my own narrative; my ego has dissoved into the mist. I came to the hills to find myself, and ended up losing myself instead. And that was immeasurably better. "

Reading this, I think I began at last to understand what some of the great Buddhist teachers are saying:

"Buddha nature then is the 'world' seen by the subject in one flowing relationship in the state called 'true nature'.  The sensory mind participates directly in the world process, but without dualistic identification as something apart."  Western Chan Master John Crook (1930-2011)

Here's a brief video of Neil Ansell at Penlan. In a way perhaps this detracts from the book: his words convey it all so well - a more subtle, open conveying. But knowing the video is there, it seemed a shame not to share it.
Posted by Jean at 13:50

I had to add this to my Kindle list.

Loren, oh good! If I loved this book, how much more will you with your equal appreciation of good writing and zennish notions plus all your loving knowledge of birds.

I'm so glad you enjoyed this! I loved it too, and agree that it is shot through with a serenity that might easily be termed Buddhist.

I was much struck a while back by the phrase 'we all aspire to a confident self-forgetfulness' and it did make me think a lot about whether magnifying problems and worries was actually at the heart of my issues, not the attentive ongoing solution that I had thought it might be. What we trust we can forget about, or at least consign to one of the invisible supports of the world. I realised that the world outside is in fact infinitely kinder than the inside of my head, and so spending more time outside myself was actually going to be hugely beneficial.

A lovely excerpt and piece of writing. Peace is a thing indeed.
x

have your read The Wisdom of Solitude, written by a Zen Buddhist nun about her experience in deep winter in the woods

I think it's still available in hard cover from Amazon

Litlove, your point about the worlds inside and outside yourself is a lovely one with which I identify.

I probably first found about this book, of course, from your lovely review: http://litlove.wordpress.com/?s=ansell
I should have linked to it. My concentration isn;t great these days: stressful, scary times...

Janice, how lovely, lovely to hear from you! I've bookmarked your reading blog.

Very true. Losing one's self in creative work is, I think, similar to the experience he describes of losing (finding) himself in nature.The ever-hungry, ever-nagging ego seems to go quiet when given something satisfying and absorbing to focus on, with no opportunities to go off track.

Thanks for this, Jean. I find the concept of losing oneself really interesting.