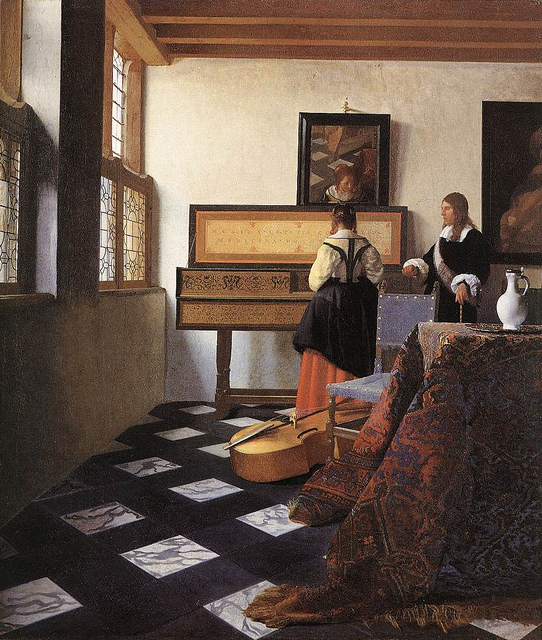 Vermeer's A Lady at the Virginals with a  Gentleman (c 1662-65)
on loan at Dulwich Picture Gallery from the Royal Collection
Scribbled in my notebook: The muted light and limited, toning palette. The 'caught in the moment' illusion. The pattern on the floor tiles that is like the pattern on the window panes. The carpet throw woven with the same red as her skirt, the same red painted on the virginal's lid. The chair whose blue upholstery is a darker version of the barely-blue walls. The dim, delicate reflection in the mirror. The multiple frames of tiles, pictures, mirror, square-contoured instrument. Everything here has its opposite, its diagonally opposite corner. The odd, questioning, tempting angle of the viewer to the room. The enigma of abandoned cello. The light on the white pitcher, which is brighter, more in focus, than the two figures. The subtlety, almost frustration, of it all, against the pure, strong beauty of the lines, the play of verticals, horizontals and diagonals. A game of perfection that builds and builds as you look, like a rising counterpoint. No desire, afterwards, to look at any other painting. The utter inwardness of this echt interior, and yet the other focus where the eyes are drawn is the window at top left, and thus the light, the world outside. So carefully staged that its careful staging makes it not one whit less 'real'. So timelessly lovely it floats above the fissure between fact and fiction and the fissure between now and then. How can the light of this day be 350 years old? So caught am I in the visual, only after some time does the aural imagination open, catch the tinkling of the keys - once heard, it persists. Is this the least luminous, and thereby the most luminous, most subtly luminous, of his paintings? Somewhere else, today, I saw the phrase: "the artifice of naturalness".
Posted by Jean at 12:54

It's always seemed to me that his women are so real, and the men seem fake, thin, more like specters. And when I look in, it is as if I have walked into an awkward pause in the conversation, other sound. That I have not been noticed, yet, and I must stay the silent intruder.

I fell in love with Vermeer's paintings when I was around 20, remember being excited about a trip to the Louvre, only to find that that day, the Dutch wing was closed :(
They always make me question, why that moment in time?

Strange painting - what is the relationship between the two? The woman's face is seen as a reflection. The man looks sympathetic towards her. But who knows what happened?

Vermeer has painted her clothes with such sensitivity.

And to me there's an odd piquancy to my perception (possibly pure projection?) that the two of them are a little out of sorts and bored; she's not really playing the harpsichord and whatever they had been doing with the cello they've given up on, and the day is scheduled to disappear like any other vaguely dissatisfying day -- except -- except that Vermeer has made this extraordinarily beautiful picture out of it.

I believe there is good evidence that all Vermeer's scenes are entirely staged: the same room, the same furniture and props seen again and again; the women often wearing the same items of clothing - worn, beautifully coloured pieces from the artist's dressing up box; the characters played by his patrons and their wives, supplemented by servants and paid models. So whatever we see in the pictures, it's all, yes, purely our projection...

Jean, that's really interesting -- it's as though he treats the human figure as part of a still life. (I'm sure this has been said a million times before but I've never heard it and only just thought of it after your comment.)

Thanks for sharing these notes! And how wonderful to have that painting in the neighborhood.

I find the floor tiles maddening, want to push them out of the way, but I also know that's how they're supposed to be, even if I can't fathom it.

Thank you for making me look properly at the pitcher, especially.