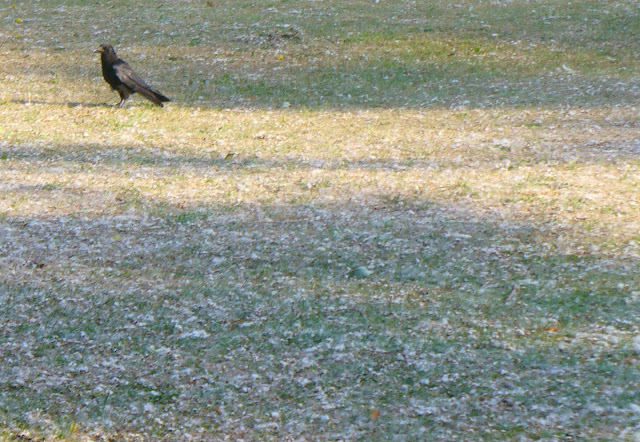 The other book I've been reading this week is Hanging On, Frances Partridge's diary of the three years following her husband's death in 1960. It's horrifying really how much I identify with the life and the feelings she describes. Have I lived the whole of my adult life in mourning for a soulmate I never had?

"What has surprised me is that just because the blow has been so mortal, as if roughly, savagely, cutting me in half and leaving me with one leg and one arm only, I am with what seems to me total illogicality struggling frantically to survive... The life instinct must be much stronger than I know.

"...I think the impulse to write here is perhaps salutory, a first attempt to let up the terrifying, iron clamp which I have fastened on my thoughts."

Such passages are scattered through a book that is full of life and travel and sociability, keen awareness of local and global realities and lively description of people and places - and all more poignant for that, of course.

"Why publish something so unbearably sad?, I may be asked. Because virtually all adults learn sooner or later that there is a great deal of sorrow in life, that it is interrupted by disasters and crushed by stresses; that death and bereavement come to everyone and have to be faced. But most also know that it is not all sad, that in its very essence lies something glorious and splendid, that the stuff it is made of arouses constant wonder and interest, that even when one cannot stop crying one must suddenly laugh."

It is all the more poignant, too, for knowing that this woman who clearly - feeling half-alive in her bereavement - thought she might not survive her husband for long, was to live another 40 years and die in 2004 not long before her 104th birthday.  Most poignant of all because the diary ends on a note of hope with the birth of her grandchild and I read it in the knowledge that a further, cruel and completely unexpected bereavement was to come, that her son collapsed and died, still in his twenties, when the baby was a few weeks old.

A terribly sad book. But also redemptive, for she lived those long years that were still to come after losing her husband and then her son, and lived them well, busy and well loved, published many literary translations (the work that kept her going through this sad time) and later many volumes of her diaries and became, as she outlived all the other members of the 'Bloomsbury Group', an increasing focus of interest and admiration.

Perhaps it isn't really her account of bereavement that I identify with at all. Perhaps it's more that what she experienced and wrote so well about after losing her beloved partner of thirty years was a particularly acute perception of what life is always like anyway, but a consuming relationship or activity may sit squarely in our central vision and obscure it.  She saw, and convincingly conveyed, what Terrance Keenan also saw: we are always nadie, nobody, and it's always winter. But perhaps this is not quite as bad as we think, quite as bad as we fear.
Posted by Jean at 19:36

What a powerful book. I'll have to go find it. I have found comfort in the midst of my hardest struggles, aware the human spirit can survive in spite of it all. I think that's why I always find music written in a minor key is more interesting and emotionally compelling.

What a harrowing story. I'm not sure I could bear to read it, since this is my worst fear, but the truth you speak of here is the truth I've come to see, too. Thanks for writing about this, Jean.

I really haven't given you a realistic picture of this book. It is much more than the things I've described. No diary entry is more than a page or two, and most of them paint vivid, discerning and often very funny pictures of people (many of them famous figures in British literary, cultural and political life) and places (she and her circle were great travellers, mostly well off and not tied to a job and few weeks holiday a year. It is as comforting and diverting as it is painful, both because she's a terrific writer and because the subject matter is consistently interesting and absorbing.

I tend to think that for those of us only too aware of winter it is important to try and be around people who see only summer (and they do exist...and they are not necessarily wrong). They can get on our nerves at times ('what do you mean sun - it's freezing out there!') but they keep us up, keep us moving, keep us alive.

Hi Rachel, that's a very interesting comment. I do know what you mean and I certainly do value people who have a lot more light and positive energy than I do. Paradoxically, though, there's nothing I would find more lonely and depressing than ONLY being around such people - it just makes me feel there's something wrong with me.

I'm trying to remember where I recently read a book review that eloquently expressed how the beautiful and convincing expression of something sad and difficult can be surprisingly comforting and spirit-raising. I really think this is true. We need both art that does this and art that is utterly light-hearted.

Actually, Frances Partridge had probably always been very much the kind of person you refer to. She was shocked by her sadness and introspection, kept them for her diaries, and would have very rarely talked about her own feelings when out with her friends - her upper class English background and the time she grew up in would have placed a lot of emphasis on this.

I don't mean that she would have been buttoned up and hypocritical. Her crowd were pretty bohemian, of course. But she would have automatically tried always to be interesting and lively, socially 'good value', and expected others to do the same. And this no doubt served her well throughout the period of this dieary.

The distinctions are not always clear ones. I suspect Terrance Keenan of being a roly-poly, cheerful sort, as buddhist teachers often are - not despite their credo, but (paradoxically, it can seem to westeners) because of it.