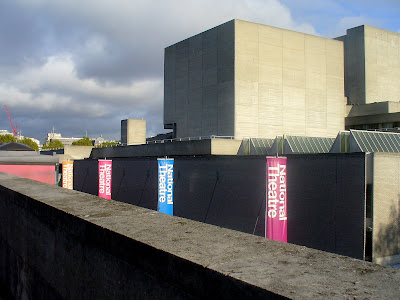 It's an interesting term, a translator's problem, you might say.

I once assumed it to be either perjorative or else the thinking of architects so perverse and arrogant as to gain satisfaction in imposing a brutal environment on people out of some kind of nihilism. Only later I learned that it was meant in a different, more noble way - refering to a kind of raw honesty and the modernist ideal of truth to materials.

Yet the idea that raw and unsoftened hard-edged lumps of concrete and metal has had a brutalising effect on people forced to live within them persists. Ironically, the misunderstanding of the term had perhaps become self-fulfilling. Or perhaps people's brutalising or otherwise was nothing to do with the built environment they live in, and it has become a scapegoat. The South bank is emphatically not a harsh environment!

However, as materials become ever more sophisticated and complex, honesty to them becomes more problematic. And isn't it a human impulse to want to form things to look like something else? And flat roofs and unrendered concrete are not very well suited to British weather.

Lucy, I usually find the South Bank much more brutal than 'brut', despite all recent worthy efforts to make it sparkle with shops, cafes, banners, carpets and pretty lights. Surprisingly aesthetically satisfying in the rather strange light yesterday morning though.

I always thought the term was truth in advertising. Not a style that appeals to me, and one I've had to live way too closely with.