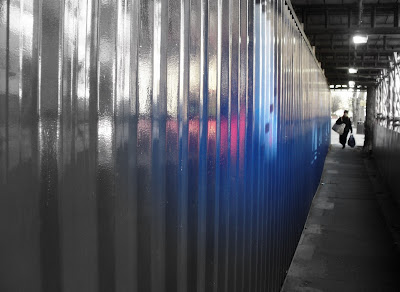 Good work! I assume you de-colored the environment outside of the reflective surface. I really like how the lateral horizon of the metallic sheet forms a slumped point at the apex of regression. Call me a thug but I like how it shoves into the small woman on the walk, its bottomless blue making even her walkway seem precarious.

I really like how I get to rustle in amidst the reflections on that corrugated sheen, kind of like a kid at burrowing in a hay-house in the barn, but here I tunnel between a celestial blue, and red that's been cooled off, so there's no itchiness and rash involved.

The dustiness of an earlier Offcut, which I think of as 'The Woman Waiting for the Lift', made me think of sintering, an industrial process of fusing two or more metals without melting them, by combining them in powdered form and heating them -- but I don't really like the idea of the heating part so leave that out. I loved inhabiting that turbid atmosphere of mixing molecules, which makes it sound wet, which I don't mean to do. In fact, trying to describe it I kept switching between metaphors of dryness and moisture; things were either staining or dusting each other, flouring or dousing. In any case, the graininess offered an entry to the fray (dryness, once again), where shadow peppered salty light. It was a fragile, rimy environment. Everything I touched left my print.

These have been just great, Jean, and I have been getting great satisfaction from them.

And, Jean, you've provoked thoughts in me, which is really pretty amazing work, and all to your credit. It occurs to me to feel guilty for merely enjoying these images. If I feel immoral, it it because I am in the light of your morality, as evidenced in selections you have made, as the title 'Offcuts' suggests. Is there a morality at work in your croppings and color elisions? A humanity certainly, empathy cloaked in circumstance.

Then there is the question of joy, of my simpleminded joy in light and in movement. These images afford both, and I have what seems a primal appreciation for both. But I engage with this matter only as it is presented to me by the craft of your alterations, so there is a subtle blend of human and inhuman, just like the way you let the woman in the lobby meld with the terrazzo, cropped so that woman is tenuous against that impending quasi-wall of light. There I go, back into a mode of sheer delight...

I'm over my head. An intellectual I'm not. But, bless you, I'm sure you've made me have a thought--please excuse my excess, I've sort of a pent up reservoir of appreciation, not only for your work, but also for so much good work of others which has not found its way in to words.

Although it is a different setting, it reminds me of the starkness of traffic lights in a rainy night in the city when all else is dark and grey.

Thanks for these still-life photos.

Bill, Good Lord! Good to know that my photos are thought provoking, but perhaps a little daunting to have provoked quite so many thoughts - far more than I had when I took the photos or posted them.

Tracker, thanks. Yes, they are 'still lives', aren't they? Perhaps you found the linking theme after all :-)

Let's say, then, that you left out your tools and I came along and tried them out. Finned bits for a slotted mind.

I feel the coldness

That's what I feel too, though I've never been able to express it as Bill has -- there's so much thought and -- what? moral intensity? -- in your photos.